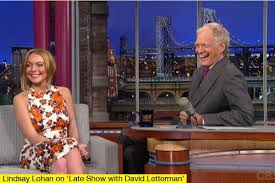 So in case you misses it, Lindsay came back from Brazil, and went on to The Late Show with David Letterman.

I love Letterman. Have done since I was a small kid and we watched him thanks to the big dishes at the studio that picked up all the foreign channels. Well, actually, back then I used to think he was kind of mean to his guests. But Julie McGregor loved him, so we would always have him on in the green room. Then I went to Honduras, and it was like comfort food when I was there. I was older and started to get his humour. I think he also mellowed a bit. I couldn’t believe when Steve Vizard ripped off his show, right down to the pencil throws and arm twist drumroll. Then nine bought Letterman and he finally came to Australian TV.

A few years ago I was in New York for a work conference, and I actually got to go see Letterman live. It was awesome. Dave and I share a birthday, and I had always dreamed of being on Letterman one day. Preferably with Drew Barrymore there also. 😉 Maybe one day I’ll have a reason to go on there, but just getting to be in the audience was pretty cool. When we were there, Vince Vaughn was on talking about Couples Retreat.

One of my other favourite people is Lindsay Lohan. I know she’s troubled, and people like to pick on her. But I think she’s incredible pretty, and a very talented actress. I still have hope that she can turn her life around and be a working actress, without a bunch of drama. I really hope that rehab works out for her. She desperately needs to just go somewhere that she can just work on her issues and not be interrupted by paparazzi and E! news all the time. It’s tough to grow up in the industry. People make fun and say she gets it easy. I’d like to see how well most people cope with just one day of being followed and targeted and having everything they do scrutinized and displayed for literally the whole world to see.

Everyone has crazy years. It’s hard to go from kid to adult and not fuck up. Everyone gets into trouble. We all do stupid things. But not everyone ends up on the news everytime they do something other people don’t approve of.

But watching this interview on Letterman, I think Lindsay is going to be just fine. She comes across as very humble. She makes fun of herself. She talks about how she respects Charlie Sheen because he’s nice to the crew. (There’s a lot of actors that are dicks to crew or lesser actors)

I truly hope that Lindsay takes this opportunity to take time for herself, and works on her demons. I hope that all the media also gives her the opportunity to take a time out and leaves her alone to fix herself. It’s important that she is given space and time. The constant hounding by people just hoping to catch her fuck up is only going to make it worse.

I’ll be sending happy thoughts to Lindsay while she’s in rehab. I hope wherever she is going has an awesome staff like they do at Heal For Life. That place was amazing, and they can do in one week what it takes some places months to do. I wish I could send her there.

When Lindsay gets out, I hope people give her a break. I hope she continues working. I hope she finds peace.

And Dave, I’d still love to be on your show one day!