Another Child Star who’s decided they don’t like their job…. 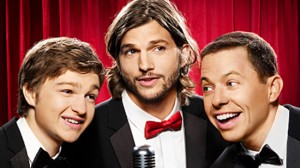 So the media world is all in a flurry this week after Angus T Jones released a video asking people not to watch Two and a Half Men, saying he works on the show, and even he doesn’t like it.

Let’s face it, the show jumped the shark when Charlie Sheen left. I think they carried on with Ashton Kutcher just to spite Charlie. Even though it seems nobody really likes the show anymore, I’m surprised at the reaction to Angus T Jones when he said he wanted off the show. People are declaring him to be an ungrateful brat, they’re saying he’s lost the plot. They’re expecting him to be fired. Here’s the thing, he WANTS to get fired.

Most people only see he gets a $300,000 paycheck a week, and think he’s an idiot for trying to get away from it. There’s comments he’s should give the money back. He should walk away. What people don’t understand, is that’s he’s contractually obligated to be there. He can’t just walk away. No matter how bad he wants to. TV studios own your life. It’s not like your job at the local store. You can’t just walk in and tell your boss to get fucked and walk out. It’s not even like a corporate job where you can hand in your two weeks notice and hope they walk you out. You’re signed up for years at a time. There’s millions of dollars riding on your being there. If you try to not turn up, they will find you, and drag you to the studio. They will take you to court and sue you for the production costs on the delays, which could be millions of dollars, per hour. Why do you think they make such a big deal when people like Lindsay Lohan turn up late on set. There’s a couple hundred crew standing around waiting. There’s the actual studio costs, there’s other talent. Even in Australia when Julie would waltz in 30 mins late to the studio, people would flip out, screaming she had wasted about $20,000. Imagine just deciding not to turn up at all?

Two and a Half Men is set to finish after this season, but I’m sure he just can’t wait. He’s been on that show since he was a tiny kid. He’s been working since 2003 to now. That’s 9 years. How many of you have stayed at the same job for 9 years? Sure, older generations stayed at the same job forever, but not these days. Especially not actors. Definitely not Child Actors. He was TEN years old when he started the show. Can you imagine starting work at 10 years old and still be doing the same job when you were 19? Seriously?

I don’t care what any parent says, kids don’t choose to be actors. They don’t say at 5 years old, I want to be an actor. Or maybe they do, but they probably don’t understand what they’re saying. If your kid says they want to be an Astronaut at 5, do you rush them off to NASA? I don’t get why parents pack up all their shit and move to LA cause their 5 year old says they want to act. Parents choose to make their kids actors. Parents push them into the biz. It’s then very difficult for the kids to get out. Being a kid actor is a totally different thing. I mean, you don’t see 8 year old working at the local McDonald’s, flipping burgers right? Child labor laws prevent kids from being exploited. Except when it come to the entertainment industry. Then it’s ok to have your kid out working, paying the rent. At least in the US there’s laws to put the majority of the money the kid earns into a trust account. There’s ways to get around it, but Angus should be set up for life on the money he’s already earned. I’m sure he’s not worried about “Career Suicide”. He can probably bank roll his own productions, if he even wants to stay in the biz. Maybe, like any other kid who wanted to be a doctor when they were a kid grew up and decided he wanted to do something different. People are making this an issue about his Faith. I don’t see why religion has anything to do with it. I simply see it as a person who’s been working since he was 6 years old and now he wants out.

Stop bashing the poor kid. The television industry isn’t nearly as glamorous as what people think it is. It’s long, hard hours. It’s mentally draining. Even when you’re not on set, you’re working. Anytime you leave the house you’re working, because you’re never allowed to have a bad day. You have to always be “on”. You think he had a normal school life or any of the other childhood experiences that civilians have? You think he can get a girlfriend without worrying about whether she’s just with him because he’s Jake? You think dealing with Charlie Sheen all those years was normal?

Give the kid a break. He’s 19. He’s trying to find his place in life. Earning a tonne of money doesn’t mean anything if you hate who you are and what you do.