Naked is the not so new black

So everyone is just in awe of Beyonce being almost naked on the red carpet at the Met Gala, in her mosquito net with sequins attached in just the right places.

I get it. She has an amazing body, and wants to show it off. With two other people there in nearly identical nude dresses, I wouldn’t really say that she’s doing anything that amazing. Even bigger LOLs at the peeps who are trying to claim that Kim Kardashian ripped off her look. It’s kind of hard to rip off someone’s look, when you’re at the same event. 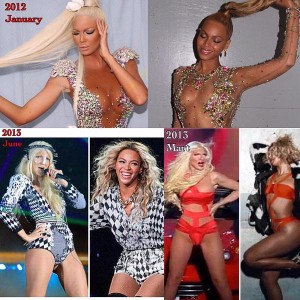 Even more amusing, is all the haters trolling Jelena Karleusa. All of Bey’s fans are directing hate at the Serbian singer, because apparently since people in America are unfamiliar with her work, she is “a nobody” and that people in the US would never copy her. Actually, if you were a big star in the US, and were going to copy anyone’s style, it would be smart to pick a sassy singer from overseas who none of your own fans had heard of.

Beyonce’s dress already has comparisons. The bride to be in Coming to America, and Left Eye Lopez from TLC.

The sheer dress trend, or as I like to think of it, The Emperor’s New Red Carpet dress, is hardly new and groundbreaking. It’s been done so many times, it’s actually quite boring to me. Cher has been doing the naked sequin look forever.

Think Rihanna was risque when she did the nearly naked dress on the red carpet? Nope.

Now, Jennifer Lopez has been almost naked on the red carpet more times than in actual opaque fabric.  Here’s just a few of her outfits.

Then there’s all these people. Some, like Natalie Portman or Nicole Kidman that you wouldn’t expect to see if sheer outfits. Some are more tasteful than others….

It seems the only real difference to whether people approve of your outfit is whether the commentators over at Fashion Police like you or not. It always amazes me that a dress on one person could be seen as “Fashion Forward” while if another celebrity wore the same thing, they’d be fined for looking like an idiot.
Case in point, Sarah Jessica Parker. If anyone else turned up in this headgear, people would be rolling on the floor with laughter. Somehow, no matter what SJP wears, it’s “just amazing“. Ugh. Sorry, I’ve never been a fan of her style. I guess at least she tried to go with the Chinese theme, which is more than can be said for any of the sheer outfits. 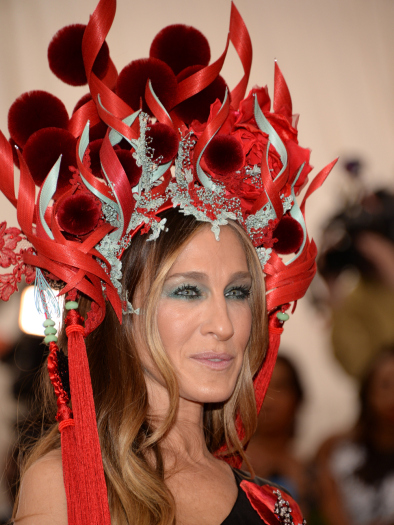 Maybe there’s a mosquito problem on the red carpet, and that’s why they’re all wearing this long sheer mosquito netting stuff. I get that these women spend hours hitting the gym, and are proud of their bodies, but, why can’t we just like you because you can sing, or dance, or act? Can’t we just respect you for your talent, without expecting you to be nearly naked on the red carpet?