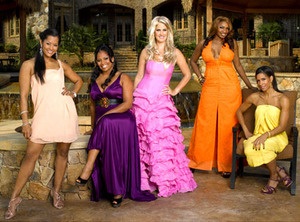 Putting the REAL back in reality TV

So they’ve just announced they’re going to make a Real Housewives of Australia. I’m not sure this is going to be a winner. Here’s why:

Australia is a large country geographically, but it’s very small population wise. People are worried about what their neighbours think. Here in the US, with a population of almost  300 million, people feel like they can go on Jerry Springer or Maury, look like total  asshats, and its ok. They can just blend in to the huge population. With 300 channels, chances are unless Joel McHale sees it and makes fun of it on The Soup, nobody is going to see it anyway.

In the mornings, when I get ready for work, I like to put on VH1 and have the video clips  running. When I get home and turn the TV on, there’s some shite show about Basketball  Wives LA. It’s total crap. Most of the Real Housewives are too. It’s supposed to be reality, but it’s not. You can tell the producers are putting the women, who  probably would never have met without the show, into totally unrealistic situations, and then purposely creating conflict, just for some drama. There’s always one  person who the rest of the wives don’t consider rich enough, on the Atlanta version  they’re all black except for the token white wife, who they all hate. Each series has  one designated bad guy. I like to refer to them as the “Scott Disick” of each show . They may be perfectly nice, but they’re edited to look like total fuckwits.

Currently, on VH1’s Couples Therapy, which is a reality show about, funnily enough, Couples Therapy, they have one of the wives from Real Housewives from New York. She’s married to an Australian guy. They used to really like each other. Too much for the  rest of the housewives… Now they’re in therapy trying to stay together.  One of thee husbands on Real Housewives LA was painted to be such a dick, he killed himself. Now here’s where I see Australia is going to be different. Look at shows that are  already in both countries, like Celebrity Apprentice.

The US version on Celebrity Apprentice is fiery. The celebs are loud and proud. They’re bold, and willing to fight. They’re all about making good TV while raising millions of dollars for their charities. Doing a show like Apprentice also gives their careers a boost. Whether they come across as nice, or total dicks, people get to know them. They get to be real for the camera. They might ham it up a little, but they’re not holding back. They’re comfortable with who they are. They know if they’re on Apprentice, they’re already famous and will keep getting work.

The Australian version was tame by comparison. Aussie celebs work in a much smaller  industry. They’re very worried about their “brand”. I can’t remember how many times I heard that during the series. People who kept saying they were worried about their brand. That’s so boring. A person shouldn’t be a brand. A person should be a person. That’s why even though everyone hated Deni Hines, they loved her, cause she was real. She didn’t care about putting on a fake persona for the cameras. She just let it out. She would have been great on the US version. Vince on the other hand was totally boring. He didn’t make a single joke the whole time he was on there. Isn’t he a comedian? He wasn’t funny. He wasn’t anything. He was just blah. I loved Charlotte Dawson. She let loose. Julia Morris deserved to win the first season. She was everything a reality TV person should be. She didn’t ham it up for the cameras. She didn’t act like a bitch to create drama. She was just herself. She’s obviously a very nice person, and we got to see that. She won by being herself. It was great. Same with Dicko. He was the most real, and he won too.

When people watch shows with celebs, they want to get to see a different side of that person. They want to know who they really are. They want to see who that person is when they’re not playing a character, or doing a carefully presented interview. They want to get to know a person. Reality TV, when done right, is a great way for an audience to really get to know someone. If however, as a celebrity, you’re worried about your brand, or you feel the need to keep up an appearance on camera, then you shouldn’t do reality TV. It’s not real. More importantly, if you feel like you can’t show who you really are on TV because people may not like you, then you’ve got bigger problems. Maybe you need to go away for a bit and change yourself for real.

I got asked about doing the first season of Apprentice. My people didn’t think it was a good idea at the time, with the case still in the works. I swear like a sailor, I don’t censor myself, and I let them know I would be in it to win it. I didn’t care about “my brand”. I don’t have one. I’ve lived in America long enough, I wouldn’t be all sweet and fake on reality TV. I don’t care what people think about me. I’m comfortable with who I am as a person. I like me, my friends like me. That’s all that matters. What some random on the interwebs thinks about me doesn’t affect how I carry myself in interviews or while out in public. I wish more people who were asked to do reality TV would have the same attitude.