How to tell the difference between real friends and faux friends 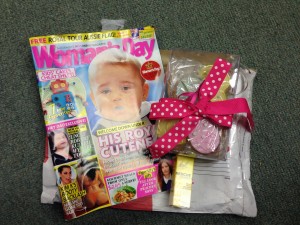 I checked the mail when I went home at lunch, and I had a package. My friend Carissa had sent me the Woman’s Day issue with Robert’s niece in it. She also made me cookies and put in some Rescue Remedy. Carissa is one of the best friends I’ve ever had. We went to High School together at Meriden. We had lost touch, but had gotten back in touch before I went public. When I did go public, Carissa was always there, checking up on me. She’d let me know when people were talking about it on the radio. She was always making sure I was doing OK, and sending me hugs. When I go home to Australia, she’s the first one to offer me a ride to and from the airport. She takes me out to eat. She makes me cupcakes. But here’s how I know Carissa is a real friend. She does all of this privately. Sure, we tweet back and forth publicly as well, but 90% of her communication to me is private. She doesn’t need to make a public display of caring for me. Real friends don’t need to publicly display their affection. I’ve been lucky to have several friends over the last few years who have supported me privately. Even other people in the public eye. Charlotte Dawson used to regularly send me messages, privately. The last message I got from her was on the 10th of February. It was the first day of the trial, but it wasn’t in the media, cause there was a suppression order. Charlotte remembered anyway, and let me know she was thinking of me. Entertainment reporter Peter Ford and I are always talking, and he never spills what we talk about. The reason I did 2DayFM and not Kyle and Jackie O? Cause producer Matt Simpson is always sending me love. Real friends are just there. They don’t need to publicize it.

Then there’s the faux friends… 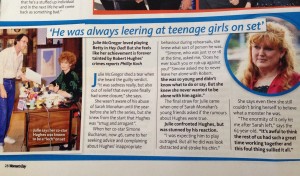 It’s funny how getting a package from a real friend helped point one of the faux friends. These are the people who seem to pop up whenever there’s a camera or journalist, but never bother to send you a message in real life. Simone and I are on FaceBook, so we’ve kept in touch, and see all the normal everyday stuff. But everyone else? Not a peep. Not a tweet, text, email, poke or even old fashioned snail mail. For the last four years, I’ve been completely alone, except for Simone. Funny though, how people keep popping their heads up, to say how much they care; when there’s an interview opportunity. – People have said the cops told them not to talk to me. The cops told me not to talk to people about the case, not cut off communication altogether.

Remember the spat I had about Barbara Walters telling Corey Feldman that he’s “destroying an entire industry” by speaking out about pedophilia? Imagine the look on my face when someone in an interview with me says, “A Man’s life in ruined”. Yep, they edited out my reaction to that. Here’s a tip, when you’re sitting with a victim of abuse, who has spent years trying to bring a pedophile to justice, and has had the whole of Oz slapping her down for it, the rest of the cast is guilt tripping that person for not getting any work, and then you come out and blame said victim for ruining a pedo’s life… Don’t expect a Christmas card….. Just saying. Also, probably shouldn’t go  on TV saying you didn’t know anything, then do an article saying you knew about it, but you’re only sad cause now it’s sullied the show and it won’t get shown anymore. Not the only faux friend, but a good example.

I’m sure come Friday, when someone asks for comment on the sentencing, they’ll be only to happy to say some BS about how they hope I get closure, or how it’s all over now, blah, blah, blah, but unless you’re sending me a message to say it to ME, personally,  it’s absolutely meaningless. But as long as you look good on camera, that’s all that matters, right?

I know I should “play the game” and pretend we’re all really tight, but I’m over it. My life is about honesty. If I don’t give a shit, I’m not going to pretend I do.

Back to the real friends; Carissa sells cupcakes over at the Fox Studios markets on Wednesdays and Saturdays. They’re the best cupcakes in Sydney. Go visit her. Tell her Hi! Try her cupcakes and give her a hug for me. She’s awesome.  Follow her on twitter  @Carissacupcake or see what yummy creation she’s come up with on Instagram

To all my other real friends, thanks for being there. I appreciate all of you!