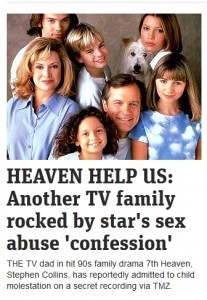 So last month I spoke to news.com.au and to Studio 10 about how there was still more child sex offenders in the industry. I said people would have to be naive to think there wasn’t more. Whether it’s in Australia, the US, the UK, or anywhere. Predators exist everywhere.

I don’t know why we’re so shocked when an actor is found to be a pervert. Actors are just like everyone else. Acting is just a job. Just like working flipping burgers, delivering mail, sitting behind a desk, typing all day. It’s all just work. It’s just an actor is way more visible. We all see their work. Doesn’t make them any more special, or any more gifted than anyone else. We shouldn’t put people on a pedestal for playing make believe for a living.

This morning I woke up to a bunch of messages concerning Stephen Collins. His wife had taped him during a therapy session, and it’s now been leaked on TMZ. I probably should have had my morning coffee before listening to the tape… Seriously, if you’re feeling frail, or have been the victim of abuse, I’ll give you a trigger warning. You might not want to hear it. It made me nauseous.

Comments on TMZ are saying the wife should have spoken up sooner, but I’m actually pretty impressed she had the balls to tape it at all. Hopefully this will make the police investigation that much easier. She’s divorcing him. Whether she’s leaking the tape because of the divorce, or she’s divorcing him because of the abuse, I applaud her. From the sound of her on the tape, it sounds like she’s divorcing him because of the abuse. She sounds horrified. I’m glad there’s one Hollywood wife who has chosen to leave a man who offends against children, instead of being like those other lackeys who stood beside their predator husbands in court, defending them. (Yes, I’m looking at you Robyn, Alwen and Dottie)

He admitted to several girls on the tape. Hopefully there aren’t any more. Collins is on the national board for the Screen Actors Guild. He was on 7th Heaven and The Fosters, both of which had young girls in it. Let’s hope if anyone else in the industry has been affected, they go to the police. Hopefully we won’t get a bunch of Hollywood people scrambling to his defense like they do for Roman and Woody….

Sad day in Hollywood. But at least people are finally talking about it.