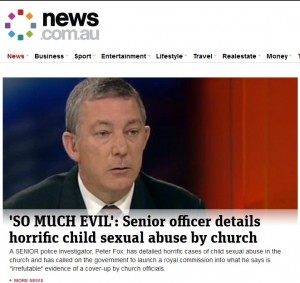 This week I’ve noticed there’s a lot of coverage of child abuse cases. While the fact that so many kids are being abused makes me sad, I’m thrilled that it’s now making front page news. Over the last couple of years, it’s become more and more acceptable to talk about it, to cover it. To acknowledge that it happens.

We’ve come a long way in the last 2.5 years. When I went public with my story, people were furious. He wasn’t named, and I was told to name and shame or STFU. Then, he was named, and people were furious. Couldn’t win either way. At least he’s alive to defend himself…. (Looking forward to that!) The last few weeks, nobody seems to have any problem with Jimmy Savile being named, even though he’s dead and can’t refute the claims. I wonder if people are ok with it because we’ve come that far in the last couple years we now actually believe girls when they speak up, or if it’s because he’s just so obviously creepy there’s no doubt, or if it’s because he’s dead and doesn’t have to live with a possible tarnished rep.

No matter, I’m thrilled to see the media covering abuse. I’m so glad I was a part of that. I hope there’s lots more cases where people can use that medium to get justice, when they’re not being listened to in other avenues. I don’t think it needs to be just famous people either. Regular people should have the ability to be heard too. People might call it a media witch hunt, but if nobody will listen to you, or worse, it’s getting repeatedly swept under the carpet, the media can be an important tool. When you’ve been silenced for so long, seeing your words everywhere can be very powerful and healing.

Plus, I bet if a kid told their predator they were going to tell not only their parents, but the newspaper, it’d stop pretty quick….