Paul Peterson from A Minor Consideration wrote this really good post about Miley back when she was in trouble the first, second time.

Somebody Supplied the Pole 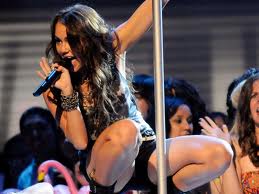 Miley Cyrus, you might recall, had a run in with a stripper’s pole not too long ago on the Teen Choice Awards (Aug 13, 2009). A savvy psychologist then posed the quintessential question: “Who supplied the pole?”
Forget the family members who failed to put a halt to last Sunday’s ‘performance’ at the VMA’s. Miley’s ‘family’ put their child on the auction block years ago. “Vanity Fair” was just a portend of what we saw on Sunday. But what about the legions of so-called “adults” who through silence or support enabled the tawdry exhibition of juvenile lasciviousness witnessed by unsuspecting millions? The song-and-dance-routine (based on Brittany Spear’s comeback video) was a construct, choreographed and rehearsed for hours on end; costumed and lighted for maximum effect, by so-called “artists” who were expressing their right to offend…and deliberately developed to enhance Miley’s image as an artist who matters.
Bull****. The Producers signed off on this disgusting misuse of media access. The agents and managers gave no thought to the true consequences on the life of their meal-ticket. National advertisers bought into this travesty of adolescent infamy…and they were Adults all.
Don’t you see what they’re doing? Can their assault on childhood and adolescence be any clearer? Kids, you see, are just amoral Consumers. The emerging sexuality of adolescents has to be channeled into no-boundaries perversion and anything-goes public display! Adults with no skin in the Game (but for profit) are telling you that young people are prey.
Miley Cyrus is Twenty Years-Old. Do you think she understands the true consequences to her personal life inherent her latest showcase? How can she possibly understand the hidden agendas of the supervising adult sociopaths who surround talented youngsters in the entertainment industry? Blatant public sexuality disguised as entertainment is a disguise, a screening device for predatory adults who see children as toys, who carefully cultivate and groom developing children as a means to an end namely personal gratification and validation of undisclosed predilections; be they sexual, political or philosophical.
Is Miley culpable in all of this? Yes. That is HER in the video. If she cares about her long-suffering fans, if she cares about herself, it is time to bid adieu to the Business and get herself into a university outside the United States and spend the next four years finding out what SHE wants, what SHE cares about, and how useless a choreographed romp is to a meaningful personal relationship.
As for the Adults who have been complicit in this latest child star fiasco, they all should be brought up on charges. Personally, I’d like to see full background checks, vetted personality profiles, in-depth examinations of their philosophical, political and sexual preferences, and their financial compensation for their participation in the deconstruction of a child star.
Remember, somebody supplied the POLE!

This post was written by Paul Peterson from A Minor Consideration

One Reply to “Somebody supplied the pole”