What the Hell are NBC thinking giving a Pedophile airtime? 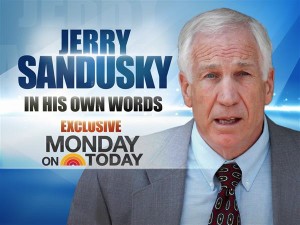 Jerry Sandusky, the Penn State coach who is currently serving a 30 – 60 year prison sentence for RAPING young boys, is getting an exclusive “In His Own Words” on NBC on Monday morning.

Who the hell thought it would be a good idea to give Jerry airtime? Why are we letting a convicted child molester go on air, to give “his side” of the story? Has NBC given any consideration to his victims, or the millions of other survivors of abuse and wondered what the impact of seeing this monster on air could do to them? I’m guessing he’s not going to go on air and admit he’s a dirty pedo and he’s deeply sorry for all the pain and suffering he’s caused.

People like him think they’ve done nothing wrong. All this interview is going to do is trigger a lot of people. It’s going to cause great distress. In the midst of the other rape cases going on now, especially the Steubenville case, where people are blaming the victim, this interview is just going to show people once again that as long as you’re some kind of sports hero, or famous person, or have the upper hand socially over your victims, you’ll still be loved and lauded, and the victims will remain in the shadows, taunted, scared and re victimized.

Why don’t some of the networks do some interviews showing the impacts of abuse. Show some documentaries of the effects of trauma. How it deeply impacts people for the rest of their lives. How it can effect all their life choices. Instead of giving a voice to this deeply perverted man who took the innocence of so many young men, why not help the cause. Help bring forth change. Stop contributing to the rape culture.