Beliebers and Directioners, what’s wrong with them? 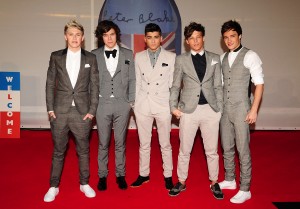 Male singers and boy bands have always had legions of screaming fans. New Kids on the Block, Westlife, Boys to Men, even way back in the age of The Beatles and Elvis, girls were crying hysterically and fainting at the sight of their chosen singing Idol. Girls packed airports, hoping to catch a glimpse of their crush as they landed for a tour. They saved for weeks to buy tickets to see them in concert. Groupies devised ways to get a little closer to their chosen tasty treat. There’s all kinds of movies depicting what went on behind the scenes of bands that catered to the  18-30 crowd.

But I wonder if women were always this psycho and bitchy about bands, or if we’re only just now seeing it because of social media. Did our mothers threaten to kill another girl because Elvis smiled at her. Did we tell a girl to kill herself because Marky Mark said hi to her at a party?

It seems like every week there’s an article about Beliebers or Directions mass hounding someone because they went on a date, said hi to, or unbelievably, because they were retweeted… Yes, Beliebers are threatening death because a girl got retweeted and she wasn’t a previous fan.

Seriously girls, get a grip. I hate to break it to you, but no matter how much you think you’re in love with a singer, he’s probably never, ever going to go out with you. Even if you were to meet, the first time they see you flip out and go all cavewoman on another chick he’s talking to, he’s not going to just ditch you, there’s going to be some serious restraining orders against you.

Now, in some cases, singers do go out with regular girls. The Hanson brothers all married groupies, I mean, girls they met at concerts. Maybe boys these days are better, but it wasn’t long ago that singers would be married, but still be tapping everything they could on the road. Do you really want to be with a guy who isn’t faithful? I don’t care how famous someone is, if they’re not keeping it in their pants, it ain’t worth it. There’s way too many gross things out there that don’t wash off…

Then there’s the question of how are these kids on social media and issuing death threats without getting a serious whipping from their parents? Shouldn’t parents be monitoring their social media use? How are girls on Facebook and Twitter and just going all kinds of crazy? Parents need to be monitoring their children’s social media use. They need to explain to their daughters that it’s not OK to tell another girl to kill herself, or threaten to kill her because she was seen with a singer.

Parents should also be monitoring their kids social media for other reasons. There are just as many psycho cyber stalkers targeting these young girls as there are young girls targeting other young girls. While the girls are going crazy, there are devious men out there who will use social media to try to groom girls online. There are people who will hound a celebrity, hoping to get a message back, then make it look like they know a celebrity. The young girls will be naive enough to talk to the pervert, thinking there’s some connection there. In some cases, girls are kidnapped because they believe the creep and will agree to meet somewhere, thinking it will lead to meeting the celebrity.

Girls, if you have been contacted online by some perv pretending to be friends with a celebrity, it’s not real. Tell your parents. Tell the police. Remember you’re not the only one being targeted. The pedo is going to be trying to contact lots of girls, hoping one will fall for his bullshit. I hear of girls who don’t want to tell their parents when they’ve been contacted by someone online who turns out to be scamming them, because they’re worried about losing rights to social media. But I need you to tell people if this happens to you. You need to know you’re not the only one targeted, and someone else may not be as smart as you and find out before they get hurt. I know you’re fighting over trying to get to the boy, but you will feel terrible if another girl really is raped and killed because she believed a boy online could get her to a celebrity. Never believe someone who contacts you online pretending to be able to hook you up. If someone online engages in inappropriate conversation with you, take a screenshot of it, and show it to your parents. Parents, observe your kids online behaviour and make sure they’re not being targeted by internet predators.

Be nice to each other, and be safe online.