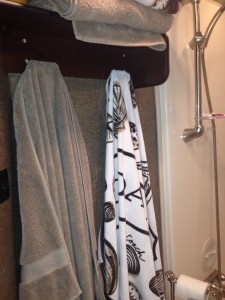 As I lay in the tub in the RV tonight, looking at the two towels on the hooks, it got me thinking.
Why is there a difference between beach towels and bath towels? Why is it socially unacceptable to use a bath towel at the beach, and vice versa in the bathroom?
When we got the new RV, we bought some really like Calvin Klein sheets and towels. Around the same time, I had seen some really nice coach beach towels that I thought would look great in the bathroom. Sure, they’re supposed to be beach towels, but they’re soft and pretty, and the browns match my RV fabulously. Why can’t I be a rebel and have beach towels in my bathroom? Who made that a thing anyway?
It’s probably some consumerist marketing ploy to make people buy more stuff.

So I’m going to live by my own rules. Matt prefers the Calvin Klein towel, and I like my coach towels, so we have one of each up. I think if you want to brighten up your bathroom with some funky beach towels, go ahead. Break the interior decoration rules!

One Reply to “Towels – Beach or Bath?”