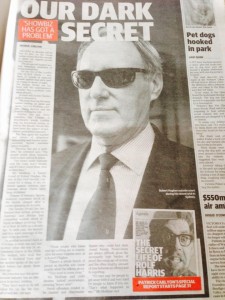 It’s amazing how far we’ve come in the last four years. When I went public four years ago, it was still taboo to point the finger at a celebrity for having committed a sex crime. People before me had tried and failed. Some named their perpetrators, and nothing was done, others came out and said something had happened, but didn’t dare name the people involved. All of us experienced a public backlash. You’d think the victims were the perpetrators by some of the reactions.

But now with Operation Yewtree in England, the Royal Commission in Australia and even the US has had some very public child sex scandals, things are starting to happen.

It’s been wonderful to see the attitude shift over the last couple years, although we’ve still got a ways to go.

@BrownSquirrel on Twitter asked me this morning why all celebrities say this? “Rolf thought his celebrity status placed him above the law”. Which is true, all these people; Jimmy Savile, Robert Hughes, Rolf Harris, Jerry Sandusky, Roman Polanski, etc all think they are above the law. It’s not just these people though. Look at what’s happening to people like Justin Beiber, Lindsay Lohan or Miley Cyrus, or any other celebrity that seems out of control. We teach these people that they are above the law. Nobody tells these people NO, and they may start small, but when they keep getting away with everything, they get bolder. Their crimes get bigger. Then when people do something and somebody does tell them no, they don’t care anymore. They figure somebody on their team will just take care of it, and clean up the mess. Look at the people surrounding Robert Hughes. He had plenty of girls tell him no, but he had people like Gary Reilly and the executives at Seven who simply covered up what he was doing, and allowed him to keep committing his crimes.

FYI, I’m in no way saying Justin, Lindsay or Miley are involved in sexual assaults. They’re just the big ones in the news right now with everyone claiming they’re out of control. Unlike the pedo’s though, Justin and Lindsay are getting into trouble for their legal infractions. It’s a pity that teens and young adults are getting into more trouble for kid behaviour than grown men who rape kids are though….

Hopefully this last few years of people speaking up, and these people finally being caught out and made to pay for their crimes will have the effect of making people realize they can’t get away with this shit, and they will think twice before hurting a kid. More people will see that they will be believed when they speak up against a celebrity, and will have the courage to speak up, and have them charged when appropriate. Hopefully the people who are protecting these pedophiles will realize that when the pedo goes down, they’re going to be dragged down with them, and instead of aiding the pedo, they’ll help the victim instead. The questionable ones in the US seem to be the most untouchable. People there really do seem to think that as long as you exhibit some kind of talent, that it makes it OK for you to sexually abuse people. Look at the debate over Woody Allen, Roman Polanski or photographer Terry Richardson.

So congratulations to today’s winners, the girls in the Rolf Harris case. Not just the few who managed to get charges. Just like our case against Robert, there was many more girls who were molested by Rolf Harris who didn’t get charges against him, or even get to talk in court. They must be happy though that he has been found guilty on at least those 12 charges. I know that even if Robert hadn’t been found guilty on mine, I was so happy for the other girls, and so glad he was found guilty on at least one charge.

If anyone out there reading this is wondering whether they should speak up against their abuser, I say YES. You never know how many other people have also been abused by that person. Some may have already spoken to police.  I know there’s several people in Australia who are wondering whether to speak up about others in the industry. You don’t have to go public like I did, but please go to the police. The Officers from the NSW sex crimes squad were the most amazing team of humans I have met. I’ll be forever grateful to them. I’m sure the teams in all the other states are just as wonderful.

Let’s keep the ball rolling. Let’s keep speaking up about these unspeakable acts. Let’s teach these predators that they are no longer untouchable.

2 Replies to “The cloak of Celebrity is no more”