I’m starting to see why it’s taking a Royal Commission to bring out all the molestation scandals. Religious folks have been systematically brainwashed to think that molestation is OK, as long as the perpetrator asks God for forgiveness.

While a bunch of religious folk condemn gays and lesbians, are are very anti-gay marriage, they find it totally appropriate to defend child molesters and people who commit incest. It’s terrifying. 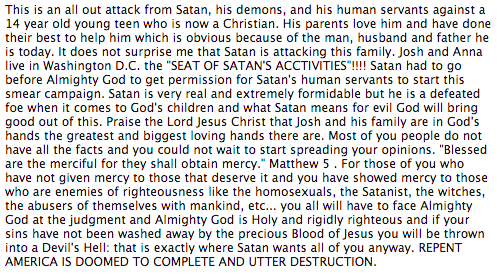 Religious people love to tell atheists that without God they’re going to go to hell. Which is funny, since we don’t believe it in. But at least the atheists are all on the internet condemning rape, child molestation and incest. You don’t need God to understand that this shit is wrong. Asking the invisible friend for forgiveness is NOT the same thing as asking your victim for forgiveness. Just because your magical invisible friend tells you he’s forgiven you, doesn’t mean the important people, the victims, have.

I know there’s a lot of good people out there who are religious who also condemn this behaviour, but it just floors me that people are seriously defending this guy, pulling the “He who is without cast the first stone” bullshit. Well, I’ve never molested a kid, so I’m going to go ahead and throw that stone.

Also, for all you sick people trying to justify his actions by saying he was a teenager, and that’s normal… Um, it wasn’t on the playground with another kid, where it was consensual. It was his fucking sisters, and they weren’t OK with it. This are a family who supposedly wait to even KISS on their wedding day. So you can’t even kiss before marriage, but it’s OK to stick your fingers in your fingers in your sister’s vagina? No. Just no.