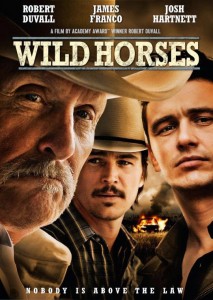 Have you ever seen a movie so horrifically bad, you feel compelled to warn others not to waste two hours of their lives?

This movie, Wild Horses, stars Robert Duvall. He’s an American legend. Usually, his stuff is amazing. Somehow though, in between writing, directing, and starring in this movie, he completely failed. His biggest fail was casting his wife as one of the main characters. Luciana Pedraza, aka Luciana Duvall, plays a Texas Ranger so wooden, Pinocchio looks real by comparison. The only other movie she has been in was another Robert Duvall movie. Look Robert, I get you love your wife, but that doesn’t mean she can, or should, act in your movie.

I wanted to turn the movie off after the first 10 minutes, but I held out for James Franco and Josh Harnett.  (Also, there’s a Tropical Storm happening, so I can’t go play outside) Even these two couldn’t save the film. The scenes involving them were slightly better, but I just felt sorry for them being in this movie, and trying to act off the rest of the cast. Franco acted his ass off 127 Hours, and he didn’t have anyone to act with in the majority of that movie. I guess that’s easier than trying to act off people who are just terrible actors. The casting director of this film should be thrown out of the Casting Directors association. Did he even have these people read their lines before giving them their jobs? The other “Rangers” and cast members seems to have taking acting lessons from William Shatner, but forgot to use facial expressions.

The movie wasn’t helped along by my other pet peeve in movies; filming locations that aren’t remotely like the place that they’re set. I know the Texas Film Commission fucked up a few years ago by taking away film incentives, so now all these movies that are set in Texas go film somewhere else, but seriously, how do you make a movie that is supposed to be set on the Rio Grande in Texas, in Utah? Sure, Texas and Utah might both have some rocky regions, but I can assure you that nowhere along the Mexican border does it look like the Mountains of Utah. There’s no mormon tabernacles, and I laughed my ass off when the fictional LaBelle County Sheriff car was parked, and they forgot to take the Utah license plate off of it.  Also, why do people think that every movie set in Texas needs to be all about cowboys wearing wranglers and Stetsons. I was so confused when I moved to Texas and there wasn’t cowboys everywhere. Every Hollywood movie made me think there was nothing but horses and oil rigs in this huge state. Sure, there are cowboys, but that’s not all there is. It’s such a cliche.

So, save yourself the time, and the frustration, and probably your voice as you start screaming at the screen. Find something else to watch. Pretty much anything that Duvall, Franco or Harnett are in. Anything would be better than this. I guess at least Matt was amused, but I think he was watching me watch the film…. Let’s just say, I got more animated than anyone paid to be in this film.