You know how most people don’t like their in-laws?

Thankfully, I do not have this problem. Growing up in Oz, I had 11 cousins on my Dad’s side. I don’t know how many are on my Mum’s side. She doesn’t like her family, so we really didn’t get to know them. I only knew her parents because we would go stay with them and they used to babysit me a lot. I knew she had a sister that died when she was a kid, and an older brother. I found out recently that there was in fact 2 older brothers…. The only other person on her side that I ever talked to was my cousin Allan. I always liked him, but Mum didn’t like us talking to anyone from her family, so we didn’t see him much. She hates her family so much, she didn’t even go to her own dad’s funeral…

Dad was one of 3. He was the youngest. His oldest brother had 5 kids and his sister had 4. We spent most holidays together. My aunt had a pool and so Christmas was usually at her house so we could all splash around. I remember getting together for Xmas and Easter but not many other holidays. My brother is 6 years older than me. I love him with all my heart, but we’re really not that close. I am the baby of all the cousins. Like everyone, I have my favourites. (That’s you Matthew and Julie!) However, I’ve lived here for 10 years now, and not a single relative has visited me. I bet if I lived in Hawaii, LA nor NYC, I’d be swamped with visiting relatives. I do have one Aunt who does write me nice cards and emails me. Thanks Aunty Helen. I love getting mail from you. Otherwise, I get left out of the loop. A few years ago, someone had mentioned my uncle was sick. I was one the phone home and I asked about him. Turns out he had died about 4 months earlier and nobody bothered to tell me…. I had to tell my Mum she couldn’t email me when someone died, she had to pick up the phone and call… We all have Skype. They still don’t keep me in the loop.

Matt has a large family. His dad is one of NINE kids. So when we get together for holidays, it’s HUGE and they get together for every hallmark holiday. I first met them all at his family reunion. There was about 50 people there for me to meet all at once. Matt’s an only child, and his cousins are a few years younger or older, so there’s really not anyone right around his age he grew up with. He always preferred hanging out with the adults. They like to bicker amongst each other and play favourites. It’s quite amusing. His grandpa was a sailor in WWII and is one of the sweetest people ever. His grandma was a nurse. It’s like an old Hollywood movie.

The only thing I didn’t like about all the get togethers is that they are all huggers. They want to hug you when you walk in, they’ll hug you again when you leave. They may not seem like a big deal, but when there’s 40 people in a room, and they all want to hug you, it gets a bit much, especially when you’re not a hugger. I’m fairly big on my personal space. I don’t mind kissing someone on the cheek. I’ll gladly shake your hand. But I really don’t like to hug people. I’ve gotten used to it, and I’ll hug a close friend. But to have to walk around a large room and hug everyone is just silly. I almost had them trained to just shake my hand, but there’s one uncle who insists on grabbing that extended hand, pulling me in and bear hugging me. There’s one other foreign in-law. An Aunt from France. She’s not a hugger either. One day, they were talking about her behind her back, bitching about how she didn’t like to hug. That’s when I just let it out that I didn’t like to hug them either. They all looked at me like I was crazy. Oh well. At least I’m honest about it.

We used to hang out with them more, but lately, we’re taking them in smaller doses. Several of the Aunts have been mean to Matt’s mum, so we’re boycotting them. I’ve just learnt to accept their bickering and find amusement in it. Since his head injury, Matt’s not so tolerant. Funny how just as I get over the hugging, he says we don’t have to go anymore….

We do hang out with Matt’s parents a lot. I’d say we eat with them at least once a week. I’m not sure how to describe them. His Mom is a cross between Leave it to Beaver and the Mom on That’s 70’s show. She’s super nurturing and I don’t think I’ve ever heard a bad word come out of her mouth about anybody. So it was highly amusing the other day when they came over to dinner at our house and she saw the cookbook out on the table. Matt had wanted to see the recipe for potato salad which was in the book. But when she saw the title, she questioned it. It was the Australian Women’s Weekly Beginners Cookbook. 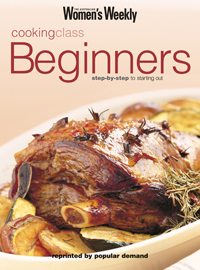 Now, bear in mind, I had just cooked a roast duck. I’ve worked in restaurant kitchens for years, including some 5 star restaurants. I make killer dishes for the family get-togethers. So, she looks down, and ever so sweetly confused, says, “Why do YOU have a beginners cookbook?” I explain that I had asked my mother for a cookbook one year, with Australian recipes in it. Now, she gets even more confused. “Why would your mother buy you a beginners cookbook?” At this point, you can see that slight shake of the head, with that does that person know this girl at all? look. It was highly amusing. Matt had to explain that a lot of the recipes that I was looking for were in that book, but I was however happy that my mother in law recognized that I was in no way a “beginner” cook and had no qualms in saying so. Truthfully, I had been slightly thrown when my mother gave me the beginners book. For some reason, she thinks my brother is a gourmet chef and I just make crap food. I think my mother in law knows and loves me way more than my mother back in Oz. I’m grateful every day that I lucked out and got such a great MIL. So many people have horror stories about their MIL. I love mine dearly and we hang out even when Matt’s out of town on business.

So I quite enjoy being over here. Even though sometimes I get sick of having to be the one to cook all the time, I do enjoy that everyone over here loves my food. People always ask what I’m going to be bringing. Our friends ask when we’re doing another party, since I always cook. My Aussie friends always ask me to make meat pies and sausage rolls. After our friends go hunting, they bring me the deer to butcher, and then I make some great backstrap for us all.

Sometimes I wish I could see my relatives in Oz more often, but after 10 years here and having made the trip home several times and nobody coming here, I’ve gotten happy with the idea that at least over here people like me for who I am.  Who I really am, now. Not who I used to be, or who people perceive me to be. They don’t know about Hey Dad..! or that I’m some former child star.  My in-laws accept me for being some strange foreigner with weird taste in food who doesn’t like to hug. I accept them as weird Americans who like to be way too into each others business and personal space.  But, the most important thing is that we accept each other. Nobody’s perfect. I know I’m not. I don’t expect others to be. It’s our flaws that make us interesting and endearing to each other.

I just wish some people in my family back in Oz understood that.