A lot of people have asked how I made it through the last few years. Going public with my story was pretty tough, and there were days I wish I had never spoken up. I know many other people have gone through similar thoughts, after they found their voice, and decided to speak up.

I didn’t put it in the book, Allegedly, because I didn’t want the Negative Nancy’s, or certain people’s lawyers to try to twist my words, and claim that I was putting all this out there to get my own TV show. Yep, the lines of questioning in court has made me very careful about how or what I say things these days, because anything you say can and will be twisted to use against you in court.

However, I think it’s an important question. There are very dark days, and sometimes, you need something to get you through. Some people have religion. I’m an atheist, but I can absolutely see how having faith in a higher power is essential for some people. I can see that some people get great comfort from their belief in a God, and how they can talk to that person, and can find strength to get through the dark days. If you have a deity that brings you comfort, then power to you. Hold on to that.

I don’t believe in a God, although I was going to a Buddhist Temple for a while around the time I went public. I didn’t talk to Buddha, but I found great comfort in talking to my dog, Maya. The great thing about animals, well, dogs anyway, because cats are totally judgemental and aloof, is that dogs will listen to you all day long. They know when you’re sad, and will always be there to hug you and give you kisses, and let you cry it out, without talking back. It’s like talking to a God, except they’re right there, and you can pet them while you do it. Sadly, Maya died while the book was being published, and I grieved more for her than I ever have for any human. Dogs are special.

Sometimes you need more than just an ear though. You need someone to look up to. Someone you can aspire to be. Sometimes you need a hero. Someone who went through some serious shit and came out the other side a better person. For me, that was Ellen. 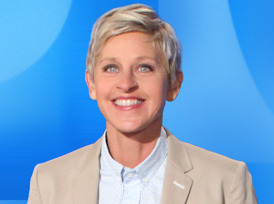 We all look at Ellen DeGeneres today and see a super successful talk show host, and the voice of Dory, that’s happily married to Portia, and is essentially a bubblier, skinnier version of Oprah. But she wasn’t always the amazing Ellen.

Back in the day, Ellen had a sitcom, called Ellen. In 1997, she came out on an episode of Oprah as a lesbian, and then her character on Ellen came out as a lesbian. She was the first openly gay person playing a gay person on TV. This was back before people were open minded, and after a season, Ellen was cancelled. Nobody cares if you’re gay/lesbian/bi-sexual today, but back then, it was still shocking to people. Ellen was a pioneer. She came out and proud, but being the first, it was hard. She took a lot of hits. She has said that when she came out, she didn’t expect it to be as big a deal as it was, she just wanted to live her life as her authentic self. For a while, that was all anyone associated her with. She went back to stand up comedy, and then eventually, she got her own talk show. We all know and love Ellen these days, and I don’t think anyone thinks twice about her being a lesbian – except for the people who are now able to come out and be loud and proud about it, thanks to Ellen paving the way for them to do so.

On my hard days, I would think about how when I spoke up, I was one of the first to do so so openly in the Australian arena, and like Ellen, people weren’t quite ready for it. But I hoped that one day, I would be that pioneer that paved the way for all those behind me to speak up and give them a voice, and nobody would question those people like they did me. They would just be accepted. I also hoped that eventually, like Ellen, I would end up happy and successful, and I would no longer be associated with only that one subject.

It’ll probably still be a few years till people will feel comfortable with me being on TV doing anything except talking about that subject, but, I am happy now. So I’d like to thank Ellen for being my inspiration for the last few years. I hope all of you can find your own Ellen, and your happy place at the end of it all.