When a celebrity is a sex offender, the victim doesn’t have the option of simply avoiding them.

I turned on the TV this morning, and as I was flicking through channels, Robert’s face popped up.

After leaving Hey Dad..! he mainly did voice over work, but he had a tiny part in a C grade movie called Race The Sun. It was about a group of Hawaiian kids who built a solar car. Anyway, since it’s an American movie that was filmed in Australia, they play it here, and it means that when I am randomly flicking through channels, I am subjected to hearing his voice, and seeing his face. Even though I no longer live in Australia, there’s still the potential of me having to see him, when I least expect it.

Thankfully, I’m pretty good at dealing with it. It’s not really a huge trigger for me anymore. (Well, today was ok) But it got me thinking about all the other people out there who are unable to avoid their perps, and how there’s always debate about celebrity sex offenders, and whether they should be allowed to continue to work.

It’s a tough question. I think it’s a shame for an entire body of work to be wiped from history simply because one person in the production was a terrible human being. Should all the cast from 7th Heaven never receive royalty cheques again because the dad molested a few girls? Should Hey Dad be wiped from TV because of Robert? What about the Cosby Show? Can we no longer listen to Six White Boomers at Xmas because of Rolf Harris? Should we avoid all movies directed by Roman Polanski, Woody Allan, Victor Salva and Bryan Singer?

I think each person has to decide for themselves. I thought 7th Heaven was cheesey, I never watched myself on Hey Dad, and Cosby always gave me the shits. However, millions of other people loved these shows. But, what about the other cast members. Is it their fault that the male stars here thought they were above the law, and didn’t keep their perverted sexual desires in check? Are we punishing an entire production by boycotting a show because of one person? Sometimes I feel like it’s not fair to the other people associated with a show. I think it’s not fair to Simone Buchanan and Ben Oxenbould that they can’t proudly display Hey Dad clips on their resumes because of something that Robert Hughes did. I feel bad for 7th Heaven cast members who rely on that residual income. I feel sorry for The Cosby kids who have to answer questions about Cosby when they’re trying to do interviews about something completely unrelated.

Then, Robert pops up on my TV. 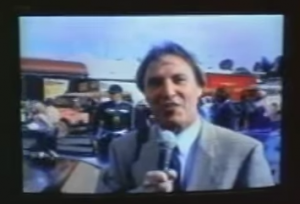 My brain goes from trying to be the impartial person, right back to seeing it from the view of anyone who has dealt with a celebrity sex offender. Even when I move overseas, I may still be subjected to seeing that trigger. Anyone who has dealt with a celebrity sex offender could be subjected to their attacker at any point. Even if they avoid their movies, or make a point not to turn on the TV when their show is on, at any point, while flicking through channels, that person could pop up. It might be on E! News, or a TV commercial, or on a random talk show. The only thing the person can do, besides refusing to watch any form of media, is to learn to deal with the trigger. Some people can, and some can’t. Some people need more time, and some don’t have access to the resources that will help them heal from that trauma.

So what’s the answer? I’m not really sure. Maybe there’s a balance. I think that while old stuff, pre-knowledge of sexual offending might be OK to keep showing, for the sake of other actors/crew, and let the public decide if they want to watch, I think that going forward, the offender should be barred from more public work. If you’re a celebrity sex offender, you shouldn’t get to keep putting your name out there. You shouldn’t be able to keep putting your face on TV, or work in movies. You shouldn’t be allowed to be glamorized, and continue to work in the industry. You shouldn’t be rewarded, while your victims have to keep seeing your face, or your name, or hear your voice, over and over, forever and ever.

It’s not just for the victims of these celebrities, but for anyone who was a victim of anyone. Seeing someone convicted of a sex crime be rewarded with work, or strutting down a red carpet sends a horrible message to victims everywhere. While the victim lives with the act forever, and has to learn to heal, the perp is out and about, living a glamorous life, being glorified, and everyone forgiving them. It doesn’t inspire victims to speak up, or try to do anything about their molester. Why bother going through the drama of police investigation, court, etc if the person if just going to go straight back to normal life afterwards? As much as I hate that we all look to Hollywood for life inspiration, we do. If people see that celebrity sex offenders aren’t punished, people will wonder what chance they have of their own perps getting punished, celebrity or not.

What about you? Do you think there’s an answer? How would you deal with it? Let them keep working, boycott all their work? Would you work with a celebrity sex offender on a production? Is art more important? Or are victims the priority? Is there a balance?

The Who’s Who of Celebrity Sex Offenders.

When I first talked about being molested by someone on set, people acted like nobody in the industry was capable of being a sex offender. Which is just silly. Just because celebrity sex offenders get away with it in crazy numbers, doesn’t mean they’re not capable of doing it. It’s not like it’s unprecedented either. Plenty of celebrities were accused before me, and with the flood of people being outed lately, hopefully, more and more of them will have to face their crimes.

So lets have a little recap of who all these creepers are. Not everyone here has been charged with a crime. The Americans, besides having a statute of limitations which prevents charges being laid, are in particular very good at having cases thrown out, or settling out of court.

Since Josh Duggar is all over the news today, lets start with

I’m not even going to try to do sports people, there’s just too many of them. Jerry Sandusky and Mike Tyson probably being the two most famous to actually serve prison time, both for rape.

Who have I missed on here?