How Real are Celebreality shows?

Australia doesn’t have a lot of Celebreality shows. There was the three seasons of Celebrity Apprentice,  one so far of I’m a Celebrity Get Me Out Of Here, and now they’ve announced Celebrity Big Brother, which only had one version way back in 2002. The US and the UK have a massive amount of Celebrity reality shows. I’m not sure if it’s because they have more celebrities to make these shows with, or if audiences are just more receptive in other markets.

Anyone who follows me knows how much I love celebreality. Sure, sometimes none of us know who the “celebrity” is, and whether they really qualify to be on a celebrity version of a show, but sometimes, those wild cards end up being the most interesting contender. People complain about these shows not having bigger celebrities, but lets be real, you’re never going to get an A lister, or probably even a B lister to go on one of these shows. Honestly, I think they’re far more interesting with lesser known, or past their prime celebrities. Famous people have a brand to protect. The up and comers, or those who have fallen from grace, don’t give a shit. They’re willing to get down and dirty. They’re going to let their real personality shine. They’re not going to attempt to maintain a persona for weeks on end, trying to make sure they don’t damage their reputation.

That said, there seems to be a huge difference in how the US and the UK cast these shows, and how their talent acts on them. The Americans always cast big, loud, brash characters, with the intent of putting a group of people together who they know will not get along. The entertainment is supposed to come from everyone yelling and scratching each others eyes out. Most of the US talent know what the network wants, and will immediately throw a diva fit, or start crying, or spend weeks antagonizing each other. Sure, it’s drama, but frankly, it bores the shit out of me. I’m sure it also bores other people, which is why the US versions of shows only last a couple of seasons, or are sporadically programmed.

The UK versions prefer to throw a bunch of people together who will be all nice and polite to begin with, until the close confines start to wear thin. Along with the challenges being set to them, they will start to become unhinged. The slow unravel is much more interesting to watch, and creates more water cooler conversations as you work out who is going to form alliances, and who will lose it next. I also find it refreshing that the UK celebs freely admit they’re going on the show to earn money, and raise their profiles. In other countries people all yabber on about how they’re on there to raise money for charity, or make up some other selfless reason to go on there. Sure, it’s great to raise money for charity, but don’t deny you’re also getting paid a wad of cash, and it’s great personal publicity.

Just like the Aussie version of these shows always have a token foreigner or two, the UK version also has a token US celebrity. Lately though, the UK version of Celebrity Big Brother has been having more and more US cast members, to the point they’re doing an actual UK vs US version. Earlier this year, they had a version with five Americans on there, including Perez Hilton.

Now, while we all know who Perez Hilton is, I’m not sure a guy who got famous for a blog where he posts pictures of actual celebrities with dicks drawn on their faces really qualifies. Yes, he’s become as famous as the people he writes about, but the guy is an absolute fucktard, and doesn’t need more oxygen. I guess the people in the UK either didn’t get who he was, or they knew exactly who he was, and that’s why they cast him. He was the epitome of the US reality star. He was worse than when Heidi and Spencer Pratt went on IACGMOOH. The whole time he just set out to create drama. He didn’t possess an inside voice, and spent half the time in there screaming about how it was “The Perez Show”, while dancing around in his undies.  I didn’t like Perez before he went on there, and I absolutely hate him with a passion now. He was someone who went on TV to raise his profile, and ended up just destroying his brand. I wonder if he watched the show back afterwards and realized what a douchebag he was. Probably not. He’s probably still blaming it all on editing. He seems to thrive on people hating him though, so he probably thinks it was a win for him.

On the other hand, when it was announced Katie Hopkins was on the show, she was met with boos as she walked in. I only knew Katie as the woman who had some very nasty views on people, and thought she would be the queen bitch of the show, and that I would hate her. After the first couple of episodes, I actually started to really like her. Yes, she’s opinionated. Yes, she can be a bitch. Yes, she doesn’t like ginger babies, and yes, she’s a snob. Yet, I found her to be a very genuine person during her time on there, and I loved that she was the one person who took no shit from Perez. Now, when you’re one of the most hated women in Britain, and you look good compared to Perez, that should be a life lesson. I’m not the only one who thought Katie was much better than Perez. I found this online poll. She would have fared better if she had backed off a bit instead of always fighting with him, but c’est la vie. I’m sure everyone else was screaming on the inside. 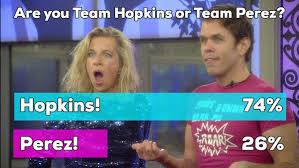 The fact these two were kept on there after Jeremy Jackson, the former child star best known as Hobie from Baywatch, and then Reg Holdsworth were evicted in the first week for bad behaviour, made many people watching at home ask if the whole show was manipulated. Perez claimed he was getting paid more than anyone else, and at one point also claimed it was in his contract he would make it to at least the final 3 episodes. Perez should have been evicted plenty of times, but because of the massive ratings, it appeared as if Big Brother was giving him immunity to keep him on the show for longer. Yes, at first it made for good ratings, but it pissed off a lot of the audience. Deceptive contacts are not good for shows. (It’s like when David Hasselhoff appeared on the Aussie version of Celebrity Apprentice, and claimed he had to leave for family reasons after the third episode. Then it came out he was only ever going to be in three episodes. Viewers were saying “Not happy Jan”.)

Katie Hopkins ended up making it to the end with Katie Price, who ultimately won the show. Pricey was a late intruder, and missed the initial fights. She was also hopped up on pain meds, and was totally laid back during her time. Some people found her very boring, but I thought it was nice to see someone not screaming. She was very much like late comer Freddie Flintoff who won IACGMOOH in Australia.

While it made for good entertainment initially, it started to get boring very quickly as a viewer, and I certainly can’t imagine how torturous it was for the rest of the poor celebrities living in that house. We as viewers could simply hit mute, or turn the telly off altogether when it got too loud. The rest of the people on the show had to live with it, 24/7. It’s no wonder that people walked out. I’m not sure I could have dealt with it. It’s a good thing they had cameras rolling non stop, or Celebrity Big Brother could have turned in Celebrity Cluedo real quick. Perez certainly loved to tell the producers people were threatening him. Of course, anytime he threatened someone, he was “just talking smack.”

Ideally, the best way to be on these shows is as the host. You get to see all the drama, meet all the celebs, but you get to go home to peace and quiet every night. Best of both worlds. Chris Brown and Julia Morris were fabulous on IACGMOOH, and who doesn’t love Ant & Dec? I’m currently girl crushing on Emma Willis. She has the most perfect pixie cut I’ve ever seen.

It’s got to be tough casting these shows. You’ve got to find the right balance of eye candy, real celebrities, and of course, drama. You’ve got to be careful not to alienate your audience by having total drama queens like Perez, who have turned many people off CBB altogether. I’m guessing after this season’s bullshit, they’ll have a hard time getting people to agree to go on the next season. (or it will be very expensive to get them) They should probably go back to only having a couple of foreigners, not half the cast. Or throw a token Aussie in the middle of the two. I bet there’s a bunch of expat Aussie celebs living in the UK who’d jump at being on there. How many Neighbours and Home & Away people live there now? Surely one of them would do it.

I think that Australia does a pretty good job of casting these shows. While there’s a bunch of couch surfers who whine about there being no “big names” on there, the last few versions of Aussie celebreality shows have been pretty good. Having been out of country for so long, I don’t always know who some of the people are, but I get to know them, and love or hate them because of their time on there. There always seems to be a good mix of old and new talent, and they do a nice job of picking people who will be laid back at the beginning, and let the drama unfold naturally. Sometimes they’re a little too laid back, but it’s certainly better than the constant screaming that the US versions have.

It’s still a few months off, but I can’t wait to see who the Aussie’s pick for both Celebrity Big Brother and I’m a Celebrity. It’s a nice way for this expat to stay in touch with people back home, without trying to watch an actual long term drama. I can binge watch a whole series in a few days. I like hearing the accents, and seeing the interactions. It’s especially cool to watch people you know personally go on these shows. I think it would be awesome if they did an Aussie version of The Surreal Life as well. Of course, I’m still pushing for for any of these show to do an all Former Child Star version. (Of course, you’d be looking at an almost entire US cast there.)

Just remember celebs, if you decide to do one of these shows, don’t do a Perez. It might be ratings gold, but nobody likes an asshole.

So discuss. Who do you want to see on the next versions of these shows? Who would you hate to see on there? Is there another reality show you’d like to see a celebrity version of, or do you hate reality TV altogether?