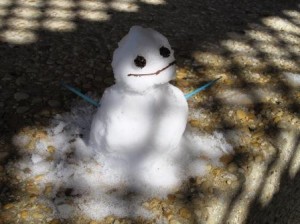 So while Australia is cleaning up after  Category 5 Cyclone Yasi and volcano’s are erupting in Asia, the US is in the middle of “Arctic Blast 2011”. The local news people are loving it!

We’ve had snow is San Antonio about 4 times in the last 16 years. The last great snow was the year we had gone back to Australia for Xmas. The year on the Boxing Day Tsunami. Seems like all the big things happen the same years…

The local weather people had been predicting the possibility of snow for almost a week. Most locals were skeptical. Usually, if they say snow, we might get lucky to have a real light flurry that lasts less than 5 minutes and doesn’t stick. I was at work on the other side of town. We close at 9pm and then clean up and get out about 10pm. We were watching the weather. Originally they had said snow starting at 11pm, but then an update said 10pm. So we hauled ass and started packing up. We were out to our cars at 9:30pm. It had started to sleet. The cars were getting an ice coating. Thankfully, Michelle and I both had our ice scrapers. We both laughed cause for weeks we’d had people ask us why we sold ice scrapers at work. People kept saying, we don’t get snow in San Antonio. We’d have to bite our tongue to keep from saying, “good thing they’re not snow scrapers then…” So, we did our cars, then helped scrape windshields from the girls leaving next door. I hit the road, driving as carefully as I could. The roads were icing over. Thankfully, we had spent a winter in Iowa, and I knew to just take my time, leave plenty of space, don’t slam brakes, etc. Closer I got to the house, the more people I saw sliding. Made it home safe, but I could hear sirens as I walked inside. 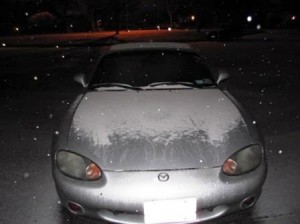 Matt was watching the news. I made it home with about 10 minutes to spare. They were shutting down all the highways. The city isn’t prepared for freak events like this. There was over 200 accidents in the first hour! There had been a 9 car pileup right behind me. (No, I didn’t cause it!)

They local news people stayed on TV all night, keeping the city updated. Matt tried to stay up to see the actual snow falling, but he ended up going to bed. About 1pm, it started to really fall. I ran outside to take pictures for Matt, in case it melted by the time he got up. It sounded really cool. It was soft snowflakes yet. It was freezing rain to start with. Tiny pellets of ice, so as it hit the ground and the house, there was a constant chink chink sound. 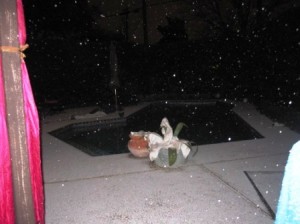 Thankfully since it had been freezing the last few nights, all the plants and pool filters were covered. The backyard and side yard were quickly covered in white. I watched the neighbours roof slowly turn white. Our gutters were filled with snow. I let the dog out to go potty. It seemed like she remembered the cold white stuff from Iowa. She ran around in it a little bit, just like a small kid would.

The whole street out the front was turning white. It was so quiet outside. No noise of cars since everything was shut down. Just the click click of ice falling. I was pretty impressed by the local news people who were up all night, following the snow. They made me laugh when they said that one reporter “Had drwn the short straw” and was stuck on remote locations. The same people were still on air 12 hours later…. 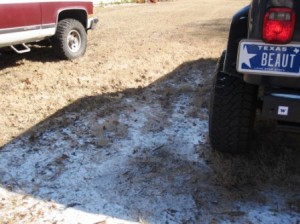 About 11am, the snow was finally starting to melt. The highways were still shut down. There ws still ice on the roads, but it was slowly melting. The sun was doing a good job, but anywhere there was shade, it was still icy. The roads finally opened up again at Noon. Of course, it was like morning peak hour traffic. Thankfully, my work had already cancelled me for the day, so I didn’t have to go driving in it. Matt finally headed in to work about 12:30.

It seems funny that such a little bit of ice is such a big deal. We had snow everyday in Iowa for 5 months. Sometimes a couple feet at a time. Here, we had some freezing rain and a light dust of snow, and the whole city just shut down! But, up north, they are set up to deal with it. Here, there’s no ice scrapers, no snow ploughs. No trucks to lay down salt. Well, I take that back. Apparently, there was city trucks, but the TXDot people were waiting for it to get above freezing before they went out to try to de-ice the roads… It seems that the people in were terrified of the ice and were scared to go out in it. The TXDot spokeswoman said they weren’t prepared for ice, which made Matt laugh and yell at the TV. We don’t get snow here often, but we do get ice a fair bit in winter. Just not usually that much.

So now the sun had come out and it’s a beautiful day here. Everyone who got the day off is probably pretty happy. It’s supposed to get way down below freezing again tonight, but no precipitation is expected.

Hope everyone in Australia is doing ok. Between Sydney getting record heat and North Queensland getting all those storms and bushfires in other parts of Oz, it makes my little snow storm story seem pretty insignificant…