So John Laws, the man who has been on air since Moses parted the red sea, has once again had an appalling interview on air with a victim of child sexual abuse. You can listen here.

I don’t understand why this guy is allowed to get away with it. If it had been Kyle Sandilands, there would have been mass outrage. People would be boycotting the station. Advertisers would be pulling their ads. Which was ridiculous, because Kyle wasn’t at fault in that interview at all. I lay full blame on the mother in that instance. He blurted out one sentence, realized what he said, and they pulled the interview. He was mortified afterwards, and he was burned at the stake.

Somehow though, when John Laws has 10 minute long interviews, berating a victim, asking why he didn’t come forward sooner, or why he didn’t call out, or any number of other insensitive statements, he’s allowed to get away with it. Concluding that the caller had simply wasted his time. He suggested the caller go to the pub and have a lemonade, before asking for a Thank You.

Are you fucking kidding me?

Update: Matt Young’s article on news.com.au has a clip with just the interview, so you don’t have to listen to the whole show. 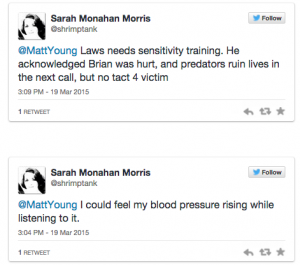