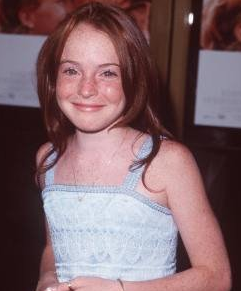 This week, she has been declared as “unbankable” and fired from her next production. She looks like a train wreck. She looks like she’s going to end up like so many other former child stars, and we’ll get a headline saying she has overdosed on crack.

I feel sorry for Lindsay. She was cute as a button when she started out. She was a pretty good actress and apparently fairly decent to work with. Her mother on the other hand, is a total wanna be celebrity and bad stage mother. Remember a few years ago, when you would see pics of Lindsay out clubbing with her mother, while she was still underage? What kind of mother uses her kid to go clubbing? What kind of clubs let an underage Lohan in?

Now that Lindsay is looking all washed up, Dina has moved on to the kid sister. Lindsay is left out in the cold. Nobody is there to take care of her, especially now that she’s not a cash cow anymore.

I can’t imagine what it would be like to be Lindsay right now. Everywhere she goes, there’s people just waiting for her to goof up, so they can splash it all over the internet and celebrity news shows. No matter what she does, it’ll be spun to make her look like a loser. People have no idea what it’s like to be constantly watched and ridiculed. To never be able to just try something and fail, like a normal human. If she gains 5lbs, there will be people talking about her getting fat. Lose the 5lbs, the media will be screaming of an eating disorder. Go out and have fun with your friends, a pap takes a bad pic of you, and you’re branded as being a drunk. She’s really in a no win situation right now.

People should lay off Lindsay. She’s had a crappy upbringing. She tries to keep working, but people just keep knocking her down, which just makes her spiral even further down the depression ladder.

I wish everyone could spend a week being hunted by the media, having people write awful things about you on the internet and being scrutinized by everyone who has access to the media before they ever judge another celebrity again. It’s not all red carpets and exclusive parties. Being famous can make you infamous. It can make you paranoid and crazy.

Next time, instead of judging Lindsay, give her a hug. She probably needs one.

I know I’m probably biased about Lindsay, since I can empathize with growing up in the media, even if I was nowhere near as famous as she is. It might also be because everytime I look at her I am reminded of a young Simone Buchanan back in her Secret Valley days. I used to love that show!

Maybe Lindsay just needs to come and spend some time in Texas, away from all the prying Hollywood eyes. Take a year off and just regroup. Nobody down here cares who you are. That’s why so many celebs keep second houses in San Antonio and Austin. They can be normal humans without ending up on TMZ…

One Reply to “Lindsay Lohan”