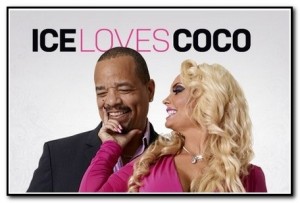 Ok, I’ve never hidden the fact that I love trashy reality TV. After a long day of serious work, sometimes it’s nice to just come home and switch off. At first I watched the Kardashians cause I was trying to work out why they were  worthy of having their own reality show. I haven’t gotten into any of the MTV shows, like Jersey Shore or the ones about teenage mothers. I’m into  switching off, not going into a coma….

I’ve watched Married to Jonas, and it’s interesting to see a girl who obviously loves her man, but really isn’t prepared for living the life of a musician’s wife. It’s obvious she’s not a gold digger, but I do think she’d like  the nice life without him having to ever leave the house. It’ll be interesting  to see whether they work out. I hope they do. It’s so nice to see a girl who loves  her man for him, not what he does, but if she doesn’t toughen up, it’s just not going to work.

Then there’s Ice Loves Coco. Here’s a couple that are going to work. Her body  may be fake, but her personality isn’t. She’s open and out there and looks  like she’s totally comfortable with who she is. She’s also totally supportive of Ice.  In return, he’s totally and utterly whipped by her. He’s what every woman wants in her man. He loves her. He loves her curves. He loves her personality. He loves her quirks. He is always right there beside her, building her up. He admits she makes his life easy and takes total care off him and he’s lost without her. They’re total best friends. They’re the ideal  couple.

I think I love Ice Loves Coco for two reasons.

I love that there’s a reality show that’s positive. Yes, they’re quirky and they do some weird stuff. However, there’s no drama. There’s no cattiness. They don’t look like they’re making shit up just for ratings. They don’t fake fight to make it interesting. It’s so refreshing to see a show that just lets people like each other. Every other show, whether it’s set in a pawn shop or catching fish creates so much drama. I have enough of that in my life without watching grown ups yell at each other over petty shit. Ice Loves Coco shows that people can just be nice to each other and still be interesting. We could all use a bit of niceness in our life.

The second reason I love them is because they remind me of Matt and I. This month, on Thanksgiving Day we’ll have been married for 10 years. I will truly have a lot to be thankful for. Matt is my best friend. He’s the best friend I’ve ever had. He’s always there for me. He loves me, flaws and all. He never cared about who I used to be, what my weight is, or anything else others obsess over. He helped me grow as a person and become comfortable in my skin. He empowers me to be what ever I want to be. He’s everything a girl wants in a boy.

While spending so much time away from home for work, Ice Loves Coco lets me enjoy a little bit of the perfect relationship I have with my own man.

Do you have a favourite guilty please reality show? Is it something like the Kardashians cause you have a big family, or no family and wish you did, or do you love those singing or cooking shows cause you secretly wish you could also sing or cook? What’s your guilty pleasure?