What’s to be done with John Laws? 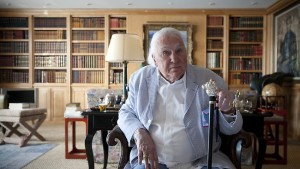 I’m feeling kinda conflicted over the whole John Laws thing. While part of me is rejoicing that people are up in arms over his pitiful interview, I fear that it’s going to turn into a lynch mob. People are already demanding he be fired, and while I certainly wouldn’t shed a tear if he was let go, I know it’s just not going to happen. So we need to find a realistic solution.

John Laws is old. Very old. His views are archaic, and honestly, I’m surprised anyone still listens to him. But then I went to pot luck dinner an hour ago at the RV park where I live, and the old people were discussing about how the government was wasting time talking about putting a woman on currency. So I guess there are still people who think the way Laws does…

Anyway, Laws has the Golden Microphone. He still pulls in millions in advertising. The station is simply not going to fire him. They’re probably secretly loving all the publicity. They’ve got thousands of people listening now who probably didn’t even know John was still alive. So, what’s to be done?

This is now the second time Laws has done a truly awful interview with a sexual abuse victim. This time, he said that a couple people had tried it on him when he was a lad, but he pushed them off. So it is because he was able to escape an encounter that he has no sympathy? Or is it more? Is it that he doesn’t know how to deal with it, so he gets defensive and brash? When he went on to the next caller, he talked about how abuse ruins lives. How people are affected forever by it, so it’s not like he doesn’t understand. He just has absolutely no tact when it comes to dealing with the victim.

I was discussing it offline with Peter Ford, and he said the station assured him that they had arranged for help for Brian. Because let’s be honest here, Brian is the real issue. Everyone is focusing on Laws, but what about Brian? The man was left weeping, and when Laws asked him to say Thank You, my heart sank. Many abusers make their victims say the same thing. I hope the station is truly getting help for Brian, and not just saying it to save face. At first I thought we needed to find Brian, but being a recluse, the publicity might just make it worse. I just hope he sees all the angry people out there, and understands that people DO care. He has people he can turn to, and he has places where he can go for help.

It’s awful that Brian went to the police back in the day, and he was told to move on. I’m so grateful that we’re finally moving on from those days. (Well, in the last couple years anyway… One of the other Hey Dad victims had been to the police previously too) I truly hope that if anyone was to go to the police now, that something would be done about it. That if someone was to call up a radio station (well, anyone except John Laws) and that they would be treated with respect. They would be heard, and talked to with empathy and compassion.

Honestly, I don’t know what to do about John Laws. He won’t be fired, so we have to come up with a way to make him see what an archaic, soulless man he comes across as. I know sensitivity training sounds weak, but it’s a good start. Maybe sit down with a few victims? (although I doubt any would sit down with him)

All I know is that while I’m so glad to see everyone so angry over this, I know that there has to be a way to fix it. For all involved.

Of course, if he was fired over this, I wouldn’t cry. He’s way past retirement age, and he’s got zillions of dollars, so it’s not like we’re sending an old man to the unemployment line. Plus, they fired those awful people from X Factor NZ fired for their tirade. Surely this is just as horrible.

You know what? Go ahead and fire him. Make an example of him. But make him do the sensitivity training first.

For the record – I don’t think that firing someone everytime they say something is stupid is the answer. If it was, everyone would be fired at some point. But John Laws really should bow out after this one.

Most importantly, let’s think about Brian, and all the other victims of abuse out there.  Think about how YOU might react if someone opens up to you. We can all learn from this. We can all think about how we’d react if someone disclosed their abuse to us, and how to make sure that we don’t end up treating them like Laws did to Brian. We’ve all said something stupid, or something insensitive, or something we regretted and wished we could take back. Let’s use this as an opportunity to grow, and not just one to vent our anger on a stupid old man. Let’s turn this negative into a positive.