Will the next Spice Girl come on down? 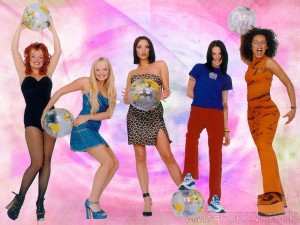 Ok, so Mel B has been banned from joining Australia’s Got Talent. Now, the rumours are that Nine is in talks with Geri, aka Ginger Spice. Before Mel B was announced, everyone was trying to get Posh Spice to come to Australia.

Now, if you were Sporty or Baby Spice, would you feel a little put out that you’re name hadn’t been tossed around yet? Well, I guess Sporty is at least working with the Jesus Christ Superstar thing. Anyone know what Baby is doing? Maybe the next reality show that pops up will announce her. It seems like it’s de rigeur to have a Spice Girl at the moment.

All Power to the girls for being so popular. It seems like all the 90’s bands are having a resurgence. But can’t they work on the UK versions of these shows?

I don’t get why none of these shows want an Aussie judge. Of course, I look at Delta Goodrem on The Voice, and people are just downright mean to her. Aussie’s say they want an Aussie host or judge, but when they get one, they’re pretty disrespectful to them. Even Danni Minogue gets mixed reviews. It seems a little better for the men. Keith Urban, even though people in Australia aren’t big on country music, seemed to have a little more respect for him.

I can see why the foreign judges are all about doing it. You get to come to Australia for a few months, revive your career in a foreign market without your local people seeing it. That means that there’s no hate from your own local crowd. Back in your home country you can boast you were a judge on a major show, and hopefully then get a job for big money at home. Even the couple of Aussie’s, Keith and Danni are also working overseas. The UK versions of these reality shows have Danni, American Idol has Keith, so maybe it’s just a mixed bag of nationalities that play music chairs on all the versions of these shows.

So now we just have to wait and see who takes the last chair on X Factor and Australia’s Got Talent. Would you like to see another Spice Girl? Or would you like them to pick a total random? Do you care if it’s an Aussie, or you just want a big name star?