Working out what I want to be when I grow up….

I’ve been getting lots of questions about what I’m going to do now that the case is over.

We all know I was an actor as a kid. We all know how that turned out… I didn’t hate acting, but I didn’t like the industry. There was lots of good people, but also plenty who knew what was going on, and chose to ignore it for the sake of their own paycheck. The industry is not glamorous. It’s not show play, or show fun, it’s show business. I think most people look at entertainers and all they see is the parties and red carpets, and the few bloated paychecks. I don’t think people realize the ridiculous hours, the hard physical labour, or that the rest of the cast and crew might be barely making minimum wage.

When I first moved to the US, I got an agent. Before Matt and I were ready to get married, I looked into getting back into the industry as a way of getting a visa so I could stay here, till we were ready to decide if we wanted to be together forever. It was the early 2000’s, and all the movies were teen flicks that involved lots of nudity or sex scenes. Neither of which I am interested in.

Matt and I got married, and I ditched the idea of acting. My few encounters on movie sets in the US made me think I never wanted to act again. Years later, I thought it might be fun to document my scuba diving fun. So we created Going Down. I had filmed some stuff, even gotten some sponsorships, and was planning a few places to dive, when I was contacted to go public about what happened to me on set. I had really enjoyed playing producer for Going Down. I loved setting up dives. I love contacting people, arranging a shoot. I got to meet awesome people. Matt sent me to the Travel Channel Academy so I could learn to shoot and edit with a little more style. I loved it so much, it made me think about returning to the industry.

Then I went public, and my life essentially shut down for the next 4 years. I couldn’t work on Going Down, because it was implied I was making it up to try to sell the show. – Still don’t know how coming out about abuse in Australia could possibly help me sell a travel show in the US…. But, for the sake of making sure there was no possible implication of impropriety, I shelved Going Down. I was also working as a social media consultant. That had to go too. I was told his lawyer made a fuss everytime I tweeted, Facebooked or blogged. Not knowing how long the investigation would last, or if there would be an eventual court case, it was hard to go get a full time job. How do you tell someone I want to work, but I may have to leave for a few weeks at some point to go to court.

I took out US citizenship. I had been so badly dissed by Australia, I never wanted to come home. Texas had embraced me, and I wanted to make it official between us. I was also worried if I had to come home for court, and who knew how long ti could take, I might lose my greencard. I’m now the proud owner of two passports.

At one point I got a call from Australia asking me if I’d like to do Celebrity Apprentice. It would have been a great time, but it’s wasn’t appropriate. Again, the fear of his lawyer accusing me of media whoring. Late last year I was thinking it might be easier to just come spend time in Australia, instead of waiting here. I had a friend who had asked the DWTS people about me being on there. We were told I was “tainted, and wouldn’t be good family viewing.” Like I was the one touching little kids…. 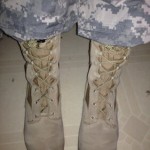 I joined the Texas State Guard a few years ago. It’s a weekend thing, but then I found a little known about operation, working in an intel office on the border. I’ve been doing that for over 2 years now, and I love it. I work with great people, have the easiest job, but I know it won’t last forever. It’s subject to yearly contract renewals. So now I’m starting to think, with all the excitement of the last few years over, and me now being able to go back to having a life, where I can do what I want, when I want, what do I want to do? What do I want to be when I grow up?

Do I want to stay in Intel? Do I want to go back to making Going Down? Do I want to return to the industry? Do I want to come back to Australia for a while and work? I’d love to spend some time in Oz so I could be an Aunt,  but realistically, I’d have to be working in the industry to afford to live in Sydney for just a few months of the year. Of course, I’d miss my husband and dog terribly if I was gone for months at a time…. Going back to acting,  movies fit the bill of a couple months work. When I see things like Russel Crowe making The Water Diviner, it tugs at me to go back to acting.  He makes movies look so pure, and so interesting to work on. So would working on a show like DWTS or Apprentice. Or hosting/judging a series. I think that would be awesomely fun, but I don’t think I’m qualified for any of those. I’m no Mel B. Acting on a long term show like H&A or Neighbours is way more work that I’d like to do, but a steady paycheck is hard to beat.

I think for now, I need a little more soul searching. If anyone was to offer me something, I’d certainly consider it. I’m not going to be actively searching for anything though. Not till I’m sure. I might decide since I’m happy at the moment, to just let it be. Or I might move to Florida and buy a bar on the beach.

I hope Simone and Ben are getting lots of work offers. They know what they want to do. They want to act. Power to them. I truly hope the industry lets go of us being tainted, and see’s what incredible actors both of them are. I’ve loved Simone since she was in Secret Valley, I couldn’t believe she didn’t move to the US and become a mega star after her work in Shame. The office was blown away today by Ben’s performance in Caught Inside. Both of them should be having the phone’s ringing off the hook, begging them to be a part of some production. I wish the best to both of them, and I hope to see both of them on my screen soon.