Did the internet kill empathy?

I just don’t get people these days. When did everyone become so angry? Why is everyone constantly so narky? When did people lose the ability to feel empathy?

There’s always been an element of “I don’t care”, especially if it wasn’t something someone could relate to personally. But it seems like these days, people don’t even TRY to put themselves in someone else’s shoes. They just make a snap judgement on why someone is an idiot, and then proceed to slander them on social media, and don’t give a shit about the feelings of the others involved.

Yes, I look at Miley. Here’s a girl, trying to do her own thing. People don’t give a shit about calling her a slut, a talentless bitch, a prostitute. She’s a talented singer, who is trying to move away from her Disney roots. But the media has decided she’s the new girl to pick on, just like they did with Britney, and Amanda, and Lindsay. If you’re young and pretty in Hollywood, you better not grow up!

Look at people like Charlotte Dawson, who almost killed herself because of the douchebags on Twitter. Why do people think it’s OK to not just talk about people online, but actually direct those comments to them, making sure they can read them. Do people think celebrities aren’t human, they don’t have feelings? I love when Jimmy Kimmel does the segment where celebrities read mean tweets about themselves. They’re trying to laugh it off, but it also helps people see that it’s not nice.

Then there’s the Maryville rape case. Two girls in a small town, raped. One of them left outside in freezing weather. The Sheriff has everything together in four hours. Then, it turns out on of the boys is well connected. He’s more popular than the girl. Then the victim blaming begins. They actually ran the girl out of town. They wrote tweets about her, wore T-shirts to school, denouncing her. The boys admitted they did it, they have video evidence, and yet, people turned on the girl.

Then today, I read something that really made me lose my faith in humanity.

There was a major blizzard in South Dakota. Now, while we’re being bombarded on the news with the all important shit, like Kris Kardashian and Bruce Jenner breaking up, and how Kris has been cheating, there wasn’t a lot of news on the blizzard.Why talk about what’s going on in the “fly over” states, when Kim is baring her body post baby?

There’s a blog post written by Dairy Carrie. It’s about the devastation in South Dakota, and how to them, it was their Hurricane Sandy. People have lost everything. The whole livelihood gone in one storm. Yes, it’s quite sad, but being farmers, and knowing they’re strong resilient people, I know they’ll rebuild. What saddens me is the comments. 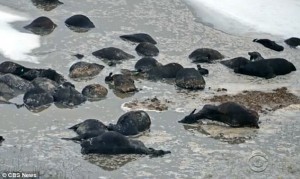 Are there really that many stupid people in the world. Do people really think beef comes from the supermarket? Do city slickers have no idea of what living in rural areas is like? Do they really think if you own a large ranch, you can just herd up your cattle when a storm is coming, and put them all inside with you?

Why are vegans and vegetarians such smug, pretentious assholes? They yap on about being veggie because they’re more caring than others, and yet it seems this lot of namaste greeting pricks is the most lacking in empathy. Maybe their body is lacking vital nutrients, or they’re just hungry, but if you’re going to preach about how awesome you are because you don’t eat meat, then don’t ruin it by being an asshole and telling someone who just lost everything they own, that they deserved it, because they contribute to the slaughter of animals. Not all animals on farms are for meat. Some are for dairy, some are just for show. Any while some are for meat, believe me, they are not just looked at as beef. Farmers love their cattle. They take great care of their animals. When one goes missing, or is taken by a coyote, you’ll see a big burly farmer cry. He’s not crying because he sees dollar signs missing. He’s crying because he’s lost one of his herd. Farmers are actually quite attached to their animals. The rancher next to us put up signs when his wife’s favourite cow went missing. Yes, on a large ranch, with several hundred head of cattle, she had a favourite, and she noticed when it wasn’t there one day.

There’s about 100,000 cows that have been killed in the storm. People are worried about the price of beef. Not about the farmers, and what they’ve lost. Just about how much extra their hamburger is going to cost them.

Does sitting at a desk and typing on a keyboard really make it that much harder for people to sympathize with others? Does the internet dehumanize us that much? Have people become so self entitled that they really just don’t give a fuck about anyone else?Do we really need to belittle one persons loss by comparing it to anothers. Devaluing one persons pain by saying it’s not as bad as another persons is just like slapping them in the face. It goes back to what your mother taught you, If you have nothing nice to say, then don’t say anything at all. Also, if you’re an ignorant dumbass who has no understanding on a situation, then shut the fuck up and keep your opinions to yourself.

I’m so glad I don’t have kids. I can’t imagine bringing new people into this world that is very rapidly becoming Idiocracy.