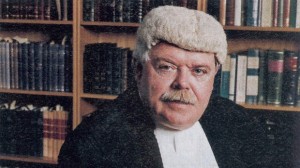 A Sydney judge has compared incest and paedophilia to homosexuality, saying the community may no longer see sexual contact between siblings and between adults and children as “unnatural” or “taboo”.

District Court Judge Garry Neilson said just as gay sex was socially unacceptable and criminal in the 1950s and 1960s but is now widely accepted, “a jury might find nothing untoward in the advance of a brother towards his sister once she had sexually matured, had sexual relationships with other men and was now ‘available’, not having [a] sexual partner”.

He also said the “only reason” that incest is still a crime is because of the high risk of genetic abnormalities in children born from consanguineous relationships “but even that falls away to an extent [because] there is such ease of contraception and readily access to abortion”.

Ok, so it’s awesome that people no longer view gay sex as taboo. I’m glad he recognizes that. However, everything that comes out of his mouth after that just scares the shit outta me.

Does he really think that two consenting adult males who engage in sexual activity is the same as an adult male having sexual relations with a male child? Is he OK with an adult male having sex with a 10 year old boy, because gay sex is no longer taboo? Does he not understand that gay sex has nothing to do with pedophilia? One can be gay, and have no interest in little boys. One can be interested in little boys, and have no interest in consenting adult gay sex. One has absolutely nothing to do with the other.

Then there’s his comments on women. So he thinks it’s OK to fuck your sister, as long as she’s been with a couple guys before you? So many jokes about Tasmania come to mind, and suddenly, none of them are funny. I can’t believe this guy thinks it’s all good to look at your sister, think, yep, she’s obviously up for it, cause she’s been with a couple guys, had a kid, so if I want me some, I can just go get it. If I get her knocked up, I’ll just take her to get an abortion.

This man needs a serious background check. Someone needs to dig in and see if he’s a member of NAMBLA. Anyone who thinks that a woman is just there to service a man, relative or not, doesn’t need to be sitting on the bench. If you can’t understand the difference between consensual sex, incest, and “oh hey, you’re not a virgin, so quit your whining”, needs some serious evaluation.

I hope this guy is disbarred. He needs to be forced off the bench. They need to go back and look at all his past cases, and see if he’s been unduly lenient to sex offenders and those charged with incest.

So grateful we’ve got the Royal Commission going on, and people are finally understanding the full effect of sexual assault on kids.

Let’s get ready for National Child Protection Week, 7th – 13th September 2014 by getting rid of this guy.

Thanks to Louise Hall for the article and bringing this guy to our attention.

One Reply to “The Judge said What?”