So last night was the US election, and this morning, you’d think that the world was about to end. On my facebook feed, there was a never ending stream of The Sky is Falling! and other such scaremongering.

Yes, Trump won. People had to know this was a possibility. I mean, he was on the ballot. The other choices were Hillary, Johnson, or as many people chose to ignore, another woman, Jill Stein. Let me start with that. There are a bunch of people crying about how we hit a glass ceiling, and how the world has gone backwards, because a man won the election. They made it sound like Hillary was the first women to ever run as a head of state. Never mind that there has already been 26 nations that have already had a woman run a country, people ignored that there was another woman on the ballot. Nobody cares that she lost. Then again, it seems nobody cared she was on there in the first place. I think a lot of people only voted for Hillary because she owned a vagina, which I think is a terrible reason to vote for someone. Vote for them based on their policies, or their record, not because of what’s in their underpants. Hillary didn’t lose because she’s a woman, she lost because people didn’t want another four years of the same thing.

Trump isn’t a true Republican, and he’s not a Democrat. I’m not really sure what he is politically. He’s a businessman who was also a reality star. He offered the people something different. Lots of people weren’t in love with what he was offering, but Americans truly believe that voting third party is a complete waste, and so while Gary Johnson had some good ideas, he really didn’t stand a chance. Much like we all loved Ron Paul back in the day. It just wasn’t going to happen.

So this morning I watched my friends lose their collective shit, crying over how they’re going to lose their healthcare, or get deported, or having their same sex marriages annulled, and I want to tell everyone to take a deep breathe, and relax.

Think back to every other election you’ve lived through, and especially since the advent of social media. Every single time, half the country loses their minds, crying it’s armageddon, that the economy will fail, that they’ll lose their rights, basically that their life is over. Then, a couple years later, those same people are complaining that the elected official hasn’t fulfilled any of their campaign promises, and that nothing is being done.

Presidents are figure heads. They can make executive orders, but they can also be struck down. Nobody walks into office and within a couple years has done all they said they would. That’s why you have the senate. There’s balance. Trump isn’t going to walk into office in January and annul your marriage, or take away your right to birth control. He has said he’ll make changes to Obamacare, but he hasn’t said what those changes are, so before you cry that you’re going to lose your healthcare, maybe wait and see what he’s actually trying to do, and then if what he wants will even pass congress, and then access your options. Who knows, since about the only thing I’ve heard him say about healthcare is that he’s going to make it tax deductible, it might actually be better for those self employed people who have to purchase their own and don’t get it through an employer. The thing is, we don’t know, so don’t give yourself an ulcer over it. Premiums already went up a ridiculous amount before he was elected, so you can’t blame that on him. I also highly doubt that insurers are going to go back to denying people with pre-existing conditions. If your insurer does, find another one who doesn’t.

As to the posts about foreigners feeling scared to be here in the US now, I haven’t met a single foreigner in real life who actually feels that way. I’m a foreigner myself, and I have plenty of other expat friends. (and no, they’re not all anglo.) We’ve all concluded that as long as you’re here legally, there’s absolutely no reason to be freaking out. Trump isn’t going to deport people here legally. I’m not sure why people think he hates foreigners, I mean, his wife is one. Is he going to start with her? No. Probably not. Will he get tough on people who are here illegally? Maybe. Do I think that’s a bad thing? Well, I spent three years working on a border program. I spent three years watching cameras, processing reports, analyzing data on the drugs, money, people and weapons that went back and forth. I saw Border Patrol agents who had a harder and harder time doing their job. I have a completely different perspective than most civilians. There’s a reason the USBP endorsed Donald. I do think that legitimate refugees have a place in society. I don’t think that paying a coyote to smuggle you across a border from a country that has no problems entitles you to live here when so many of us went through the legal process just fine. Basically, as long as your papers are in order, you’re fine. No different from the last guy.

I’m not scared of WWIII breaking out. I was actually more scared of the never ending war we could have endured if Clinton had won. She was very pro-war, and anti Russia. I don’t have a problem with a guy who actually wants to be friends with other heads of state, and who isn’t interested in another Cold War. Maybe I’m wrong. Maybe Trump will start shit, but I’ll worry about that if and when it happens.

Maybe it’s just that I’ve spent the last couple of years really trying to teach myself to breathe and be calm and not get hysterical over every little tweet or FB post, or cause du jour, that I can sit back and watch this calmy. Maybe I prefer to take a moment and see the bigger picture, or let shit play out before I get my panties in a wad, but I really think people are way overreacting.

Don’t let crying celebrities and the 24/7 news media let you get all worked up.

Trump will be sworn in, and just like every other President, anything he tries to do will be blocked in the senate. It will be years before he can realistically achieve anything. So sit back, relax, and enjoy the show. 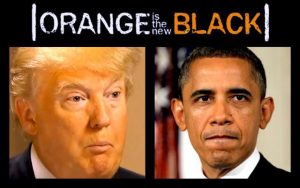 Do you understand all the fuss over the Brexit? There’s a huge referendum involving whether Britain should remain part of the European Union. I’ve seen a lot of the stuff mentioned online, but since I don’t live in the UK, or Europe, I hadn’t really researched it. It wasn’t until I was reading an article that was in my twitter feed, about Economic Migrants blending in with real refugees, and how once they reached the EU, they were free to country shop, and how it was affecting the local economies. Some people see the Brexit as the only way to stem the never ending flow of people entering the country. While many are genuine refugees, there are also plenty who are simply seeking a better life, and are costing the host countries billions of dollars. While reading the comments, someone mentioned a documentary called Brexit.

It’s a feature length documentary, and it’s obviously skewed towards being pro-Brexit. It was however very well presented, and quite fascinating. There was a lot of historical stuff in there that I wasn’t aware of, and with the US being in the midst of the US Presidential election campaign, and me being able to actually vote in the US Presidential Election, I was fascinated by the parallels that could be drawn between the way some of the EU countries went historically, and the way each US candidate is trying to steer the country now.

Britain is very much Bernie Sanders. Government trying to regulate everyone, in the interests of creating a “fair trading environment” and attempting to make everyone equal as well as safe. Free schools, housing, etc.

Germany is Trump. They believe in capitalism and a free market, where those who want to succeed, can. Those who need a bail out with government support to survive will have to move aside and either keep up or get pushed out. Survival of the fittest.

Then there’s the party that everyone ignores, and which the other two certainly don’t want anyone to think about. The whole “two party” system in a fallacy. There is a third choice, and that’s Switzerland, or in the US, the Libertarian Party. They think everyone should be able to do what they want, as long as it isn’t illegal, and doesn’t hurt anyone else. Basically, take the warning labels off everything, and let nature take its course.

Whether you’re in the EU or the US, or anywhere else, the Brexit documentary was fascinating watching. It will make you question politics, in the US, the UK, or anywhere else. Most of all, it will make you wonder what the point is of the EU, and whether it’s necessary, or if it’s the New World Order that everyone is whispering about. (Or the Capital in The Hunger Games)

What’s your take on Brexit, or the US elections? I love hearing all the opinions (that’s why I was reading comments on the original article) but remember to keep it classy. You can never win an argument or change someone’s opinion with name calling or trolling.