Why can’t Sprint unlock an iPhone?

So back in 2012 I bought an iphone 5 from Sprint. They assured me that I could use the phone anywhere in the world, and they could unlock the phone. Now, they did unlock it internationally (or they say they did, I haven’t tested it yet), but I’m trying to get them to unlock it domestically. I am well and truly out of contract, and live in an area with crappy Sprint coverage. So, I’m going to change providers. I don’t want to upgrade to a new phone, because there is nothing wrong with the phone I have.

Phone support gives me a “code” that I need to take to the next provider. But the other providers have no idea what to do with it. Even Apple says that Sprint has to unlock the phone themselves. Each customer care person gives me a totally different reason on why they can’t unlock it, and that it’s someone else’s dept.

I got a new SIM card from another provider, but they said that Sprint had to unlock the phone. They had no idea what to do with the code.

I go home, and call up phone support.

So the guy from the call center today said to take my code to the Sprint store, where they would hook it up to a computer, and they would unlock it.

I drove to the store, and they said they they weren’t a “tech” store, and that I had to take the phone home, and insert the new SIM card, and then connect it to itunes. – No, that didn’t work. 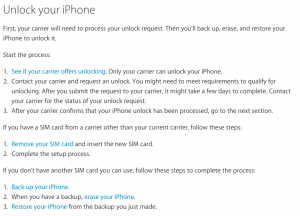 I get online, and talk to the chat people. Again, back to have the new people unlock it.

Twitter people tell me that the phone can’t be unlocked with the MSL. THEY have to do it.

So back on the phone to customer support. She’s trying to tell me I have to take the code to the new carrier, and I explain all the bullshit I’ve already been through today, and that her code is worthless. So now I’m waiting while she tries to find out if there’s another way to do this…

Sprint Legal tries to tell people that even if they do unlock the phone, it probably won’t work on another provider. So they’re trying to tell me that when I bought the phone, and asked if I could use this phone anywhere, and they told me yes, they were either lying because it can’t be used anywhere, or they’re lying now. Honestly, I don’t understand how a phone can be used in Taiwan, India, Australia, South Africa or Italy, but it can’t be used on another provider within the USA. It’s deceptive trade practices. They can unlock the phone, but they choose to just send people round and round till they give up. Now I understand why the FCC had to step in and make a law forcing carriers to unlock phones. If customers have paid for them, are are not longer under contract, it’s wrong to not hold the phone hostage to that network.

Meanwhile, I’m not sitting here waiting for the customer service people to call back and give me their latest excuse for why they can’t unlock my phone….

And they just called back, and she keeps telling me that I need to go to AT&T, and give them the code, and then they’ll unlock it.

Sprint, you suck. You’re breaking the law by not unlocking my phone, and I’m betting there’s enough other unhappy people out there to start a class action lawsuit.