Most of you know her as “Betty” and some of you may remember the infamous Hey Dad..! episode where Betty was supposed to marry long time fiancé Stan.

In real life however, this past weekend, Julie McGregor married long time beau, Adam. I wish I could have made the trip back home for the wedding, but I didn’t want to sour a happy occasion by having it get turned into an excuse for paparazzi to bring up the recent events….

Simone flew up from Melbourne and she messaged me and told me it was a beautiful day. I’m looking forward to seeing the pics online. I think there’s going to be a spread in Woman’s Day, so I’ll have to order a copy of the mag online.

So Congratulations to Julie and Adam. I hope you two are as happy as Matt and I am. I can’t wait to see you guys as Mr and Mrs when I come home next. 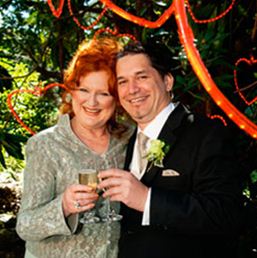 I guess as we’ve seen in the last couple of weeks, karma can be a bitch. If you don’t do the right thing, it will eventually come back to bite you in the ass.

My best friend, as she was watching all this unfold, asked me, “Which was worse, the abuse, or the fact that so many people knew about it, but didn’t do anything to stop it?”

For the record, I DO NOT blame Simone and Ben for what happened to me on the set. You have to understand, the entertainment industry in Australia back then was incredibly small. There wasn’t a lot of work around. It was very easy to become an outcast and never work again. When I confided in them, they both did what they could at the time. They went to management, they were both told to be quiet. I can also understand why they haven’t brought it to the attention of the police in the years since. They waited till I was ready to deal with it. When I was, there were there to back me up. I find it offensive that people are suggesting that they only came forward once somebody waved a cheque at them. Yes, they were offered a lot of money by some other networks to tell their story. They didn’t accept it. This was NOT a money making exercise for any of us. This was about releasing a demon that we were all carrying for so many years.

I have always loved Simone and Ben dearly. They were there for me when I needed them back then and they are here for me when I need them now. I know both of them have been carrying this with them for many years. Please do not judge them. It’s all very easy for people not involved to say what they would have done in the same situation, but until you really are in that situation, you can’t know how you would react. I know what went on back then, and I’ve seen how it’s affected their lives since. I would ask that if I still love them and hold no bad feelings, that other people would respect that. You can’t blame them.

On that note, to a lesser extent, I can even understand why Gary tried to keep it quiet. Hate the show all you want now, but at the time, we were the highest rating show on Television. It was Gary’s baby. It was his show. It was his responsibility to keep the show running. I’d like to think that I would have handled the situation differently, had two different cast members come to me telling me what was happening. But, I wasn’t in that situation, so I can’t know for sure.

Let THIS be a lesson in professionalism. If somebody comes to you, telling you that something is not right, don’t try to cover it up. When it does all come to light, however many years later, you don’t want to look like a fuckwit. There’s more to life than money.

Oh, and it’s nobody’s business how much we made, but here’s the Women’s Day letter to Media Watch about how much we got paid. We didn’t make enough to buy new houses, or even a car. They simply covered the time we had to take out of our days to tell our story. I didn’t fly first class on my 30+ hr trip back to Oz. Not even premium economy. I sat with the screaming kids back in row 70. My husband had to take time off work so he could join me, as this was something hard for me to do alone. They didn’t pay him for his time either. It’s in the police report how much I made, and it will all be evidence if we ever go to court.