It’s a few years now since Derryn Hinch came to the US, trying to get support for an Australian version of Megan’s Law. Unbelievably, it’s still not a thing in Australia. Western Australia has a form of a publicly accessible list, and while it’s a start, I still don’t think it’s as good as the ones I have available here in the US.

At the time Derryn came to the US, I was in Texas. Texas has a phenomenal Sex Offender registry. You can search by name, address, or see the most wanted sex offenders. When we had an exchange student, we were able to look at the map, and see names, photos and addresses for sex offenders on her route to school. We didn’t alarm her, we just told her there was a couple places she should avoid. There was no vigilantism, there was no picketing, there wasn’t burning bottles thrown at people’s houses. It’s just a tool, like any other, that lets you stay informed, and keep your kids safe.

We’ve moved to Florida, and they are way more pro-active here. They put up signs out the front of people’s houses in some counties. There are hundreds of pretty licence plates for cars here, with everything from the space shuttle to manatees on them, but if you’re a registered sex offender, you have one choice. Lime green. Makes it pretty easy to spot a sex offender cruising past a school… Their driver’s licence also identifies them. Schools here make visitors sign in with ID. This clearly identifies an unwanted.

The other excuse I constantly hear is about how some poor 18 year caught sexting with his 16 year old girlfriend ends up on the sex offender registry, and has to pay for life for their one indiscretion, and you know, “kids are kids”. I’m going to call BS on this one too. Every single sex offender tries to play this card. They were all some poor teenager caught with their girlfriend. Nobody ever admits they raped a kid. Matt’s mom had a kid who moved in next door to them, who was on the sex offender registry. In Texas, they’re legally obliged to tell the neighbours they’ve moved in. They tried to pull the whole “it was a misunderstanding with his girlfriend’s parents” crap, but a quick look at the sex offender registry, which actually tells you what the person did, let us know he raped a 12 year old.

Here’s the other thing about the US registries. They actually list what the offence was. They don’t name the victim, or go into explicit detail, but you can see whether someone really did get caught with their close to consensual girlfriend, or if they violently raped a child, or a man, or a woman. If you really did get popped for sexting, wouldn’t you want people to be able to see that, instead of just being a general sex offender?

Seriously, there is no reason to object to a sex offender registry. It’s a tool for keeping everyone safe, not just kids. Australia needs to step up and start protecting the innocent, not the offenders. People should be allowed to make decisions on how to keep themselves and their families safe, and you can’t do that without information.

Here’s the interview with Derryn from a few years ago. It’s all still relevant now.

The debate over naming sex offenders

As many of you are aware, I am 100% behind the Derryn Hinch campaign to get a sex offender register in Australia. Living in Texas, where we have an online sex offender registry, which feeds into apps so I can see offenders around me at any time, I know that it can work. There’s no mass hysteria. There’s no public lynchings or floggings. No random acts of violence around offenders. There’s simply an awareness that there are predators out there, and a tool that lets you see where they are. It lets you plan your kids route to school, or know which houses to avoid while selling Girl Scout cookies. We’re not quite as radical as the Sheriff in Florida who puts up signs out the front of offenders houses, but we know these people exist. 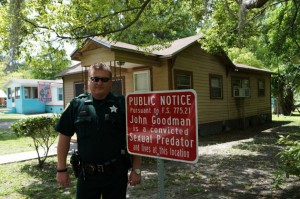 There’s something we should be learning from the high profile sex offenders that have been convicted over the last couple of years. The Daily Mail had an excellent article today about why Sex Offenders MUST be named. When I named Robert, it turned out other girls had been to police before, but he just kept managing to get it covered up. I went super public, and not only did other girls who had been to the police before get to re-open their cases, but many more girls went to the police. It wasn’t just the ones who managed to get charges against him. There were others. Many others. It’s just that some of us had enough proof to get charges laid. It doesn’t diminish what he did to the other girls, it’s just there wasn’t enough to secure a conviction. By going public though, not only did his victims come forward, but so did witnesses. People sent in photos, people gave first hand accounts of the things they had witnessed. Instead of the police having to track down potential witnesses, they had been calling them, setting up appointments. They were inundated, but it meant we got a guilty verdict.

Rolf Harris was under investigation back in 2012. It was hinted in the media who it was, but he had gotten a suppression order preventing the media from publicly naming him. Only a couple of girls at that point had come forward. When he was finally publicly named, many more women and witnesses came forward. It made the case stronger. There was another bunch of women in his case that had also been molested by him, but who didn’t get a day in court. But because he was publicly named, he will go to jail for all of them.

These celebrities hold a great deal of power. People are afraid to speak up against them. Especially when it’s just one person against a giant. It’s almost like a David and the Goliath battle. When only one person speaks up, people pounce on the victim, claiming they must be trying to tarnish a good man’s reputation, or they must be after fame or money. However, when a whole bunch of people start going to police, and it’s known that there are several complainants, even if nobody knows who they are, people have to start believing where there’s smoke, there’s fire. I can understand nobody coming out about Savile when he was alive. He was a very protected species. All of these people are. But once a couple people spoke, many more did, and now it looks like he may have been the worst sex offender ever seen in Britain. I’d like to see more of these offenders brought to justice, not just hear about them after they die. The Operation Yewtree investigation stemming from it though is amazing.

There’s a second point here. We have now seen several very high profile people charged as sex offenders. Robert Hughes, Rolf Harris, Max Clifford, Jerry Sandusky, Malcolm Fox, etc. If we can publicly name these high profile people as sex offenders, and have everyone know what they did, why can’t we name and shame everyday citizens who are harming people? People keep citing that by naming the offender, we’ll be letting people know who the victims are. Which just isn’t true. For six weeks, there was cameras out the front of the Downing Center court everyday. There was five victims, and many other witnesses. Except for me, nobody knows who any of the other victims are. If with all that public exposure the victims are still protected, I don’t buy that naming an offender will name the victim. The other thing we’ve learned is that these people don’t have just one victim. There are usually many, many victims. You can’t tell who their victims are when you name them. It could be anyone.

People in Australia seem to not want to understand that sex offenders are everyone. It’s not just one or two people. Right now, pedophiles are so protected, that people just don’t get they are everywhere. One in five kids in Australia will be molested before the age of 18. That’s a HUGE number of victims. Who do people think are committing all these offenses? A sex offender registry will let people see just how many offenders are out there. It might scare people at first to know just how many there are. After a minute, they’ll get over it. Instead of burying your head in the sand about it, it’s better to have an awareness, and then you don’t have to be fearful of it. You can pop on there and check out to see if your neighbour offering to mind your kids has a questionable past. You can see if the house you’re thinking of buying is in a neighbourhood with a bunch of offenders. You can check out your kids karate coach. Going on a date? See if the person is a rapist…

Knowledge is power. Pretending that sex offenders don’t exist doesn’t help anyone. It certainly doesn’t protect anyone. Next time you see a sex offender mentioned on the news, pay attention. Listen to see just how many times that person has been caught before, but simply moved to a  new area and started offending again. If there was a register, people would know not to let that person near their kids.

Sign the petition. Get involved with organizations like Bravehearts. Educate yourselves, and your kids. Let’s make Australia a safer place to raise children.

Watch Derryn Hinch’s episode on Sunday Night on Seven to see more about the petition.