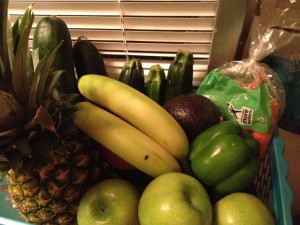 Getting the most out of my groceries.

Last year sometime I bought Matt an espresso machine and I got myself a juicer. For quite a few months, I juiced everyday. I even did a couple of juice fasts. I composted my pulp into the garden and I felt pretty good. Then I tapered off and pretty much stopped juicing for a while.

When I took this job, I packed up my juicer into my Airstream, and every couple of days I juiced. Mainly when I was trying to use up the veggies in the fridge. It was a good way to get rid of stuff quickly, without making some kind of soup or stir fry. Then, a few months ago I took it off my preciously small counter space and put it under the sink. There’s like a square foot of counter in this travel trailer, and if it wasn’t getting used full time, it was taking up too much space. Of course, then it was out of sight, out of mind. It didn’t get used for several months at all.

Then right before we went to the beach, I started thinking about my juicer again. I thought about pulling it back out when I got back from my 4 day. We got down to the beach, and I got to visit my friend Vicki. She’s another Aussie Expat that used to live in San Antonio, but she moved to the beach. Sitting out on the deck, she starts talking about that movie Fat, Sick and Nearly Dead. It’s the documentary about the Australian guy who travels across the US with his juicer. I had a great weekend, then headed back to the Border, and my first night at work, the guys in the office next to us ask me if I’ve seen this movie with the Aussie guy and the juicer…. Well, I figured the universe was trying to tell me something. So that night after work, I headed to get some veggies and pulled out the juicer. I drank my first juice while watching the movie, which I had actually never seen before.

I’m not fasting like they did, but I am glad to be getting some fresh juice again. We had been on a health kick at work for a while, but this week we’ve had pizza, hamburgers then KFC… So getting some veggies in at least I’m getting some kind of nutrients….

I normally do veggies, but I’ve started making fruit juice in the morning. I tried to put the pulp in my tiny little garden down here, but then yesterday morning I looked at my pulp, which was all fruit, and thought there had to be something else I could so with it. In the past I had tried to use the veggie pulp as a soup base, but it wasn’t very good. But I thought maybe the fruit pulp would be different. So I cut up an apple, threw it in a pot and stewed it till it was softish, then added the fruit pulp. I had defrosted some puff pastry I had in the freezer, and I made 4 little fruit pies. 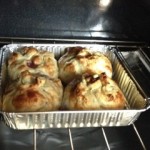 I took them to work, along with a soup made with a tonne of veggies and some prawns/shrimp. The pastries turned out pretty good, so I tried it again today. I think they look pretty good. I had used lots of blueberries, so they’re pretty purple. But it’s got a whole mash of fruit, so even though there’s pastry, it’s still a pretty good treat. Yesterday I used some cinnamon sugar butter I had in the fridge, but I didn’t have any left today, but I think they still look pretty good.

Not sure what I’m going to make for lunch today, but at least I’ve got dessert sorted. I think this is a much better use of my pulp than just chucking it in the garden, or worse, in the trash.

Do you have any weird ways you stretch your groceries? Do you do it to save money or the environment, or just hate making trips to the grocery store? 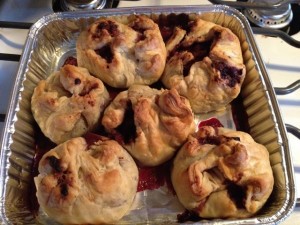 I love these cause they’re so simple. I was already making something and it’s like it almost made itself. No set recipe, just whatever is on hand. Not store bought, so I know exactly what’s in it. No chemicals or preservatives or mounds of added sugar.

Food should be simple! (and delicious)