Snuffy, or the big hairy elephant in the room… 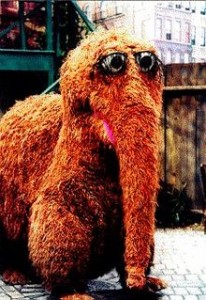 Remember Sesame Street? It’s all over the news now again thanks to the Presidential Elections. I was at Starbucks the other day, and the lady in front of me in line was making a reference to Sesame Street and Big Bird. Then she said something about Snuffy being invisible. I pointed out that they made him visible to the adults in the end. She said really, Why? I said it was something to do with the producers of the show wanting him to be visible because they were worried about pedophilia and kids not being believed. She said that sounded silly, and that pedophilia wasn’t that big a deal. Certainly not big enough to make a whole change on the show. I wanted to point out that it was probably a big deal to the 1 in 5 kids that’s a victim of child abuse, but instead I just grabbed my latte and thought about how little people care about issues that affect so many people. How swept under the carpet that child abuse is. How so many people just think because it didn’t hapen to them, that it’s not a big deal. About how basic human rights are like oxygen, it’s not a big deal until you’re not getting any.

As a kid, all the campaigns were focused on “Stranger Danger”. Kids were taught not to accept lollies from creepy men in cars. We shouldn’t talk to men in trenchcoats in the park. We shouldn’t believe someone who says Mum or Dad came to pick us up. They never taught kids what to do when someone in the own family was the creepy man hurting them… Nobody wants to face the fact that someone in their own family may be an abuser. People will just say, Oh don’t worry anout Uncle Fred. He’s just affectionate. Uncle Tom is just a bit handsy. Uncle Peter just likes to play tickle games. Kids aren’t told that when they go to family functions they have the option of NOT hugging their Uncle, or their cousin, or that family friend they don’t like for some reason. They’re told to sit on their lap for a family photo. When a child protests, they’re passed off as being grunpy or silly. The adults don’t want to listen. Which teaches the kids that the adults are allowed to do whatever they want to them. Because the adults don’t want to believe, and even if they do, it’s not polite to say anything. Which just makes the abuser bolder, while making the kids weaker.

TWO out of three child abuse survivors who contacted a helpline were harmed by a member of their immediate family, with just 2 per cent hurt by a stranger, research shows.  A further one in four victims was harmed by a member of their extended family, one in eight by a family friend and one in 10 by a member of a religious group. Teachers were responsible for 5 per cent of child abuse, the research found. It is estimated between four and five million Australian adults are survivors of childhood trauma. Here’s the link to the News.com.au article.

It’s time that the Stranger Danger campaigns were swapped for a more realistic one. We also need to be teaching adults and not just kids. We need to teach adults that if a child is trying to tell them that they aren’t comfortable around an adult, that maybe there’s a reason for that. Maybe they just get a quirky feeling from them, just like we as adults get a bad vibe from people. However, if a kid doesn’t want to hug that person, or sit on their lap, it’s important that we don’t force them to. Tell them it’s OK. Teach them that their body is theirs, and nobody has the right to be in their personal space. If you don’t like that creepy uncle who refuses to shake your hand and insists on hugging you, even when you’ve made it clear you don’t like it, why is it then OK to allow a kid to have their personal space invaded in the same way? If your kids suddenly start hating going to Grandpa’s, or they decide they don’t like going to Boy Scouts, ask them why. Listen. Use your insticts. Don’t just ignore the issue because “it’s not polite” to say no to a hug. Don’t just ignore that someone is being innapropriate with your kids because you just don’t want to face reality. Too many adults just ignore the whole issue because “it’s messy”. Too many kids who were abused grow up and just let it happen to the next generation because they survived it, so it must just be a part of life, and their kids will survive it too. Or worse, they’ve just put themselves in such a state of denial, that just like Snuffy, who Big Bird insisted was there for 17 seasons, was not seen, because the adults just chose not to see him. They saw the effects of Snuffy, and kept blaming it on other things, or using the Snuffy excuse as a scapegoat. Finally though, Big Bird worked out how to get the adults to see that Snuffy was real. Finally the adults believed in Snuffy. Believe in Snuffy. He’s real, and so is child absue.
http://en.wikipedia.org/wiki/Mr._Snuffleupagus