Supposedly, during the filming of Marathon Man, Dustin Hoffman, who is a “Method Actor” stayed up all night so he could really look the part. Lawrence Olivier told him, “Try acting, dear boy, it’s much easier.”

I’ve never really understood Method acting. I mean, I get doing training for a part if you have to have particular skills, or it’s very physical. But I don’t get the whole spending months researching and following someone around so you can really get into someone’s head. Are you an actor, or an analyst? Yes, there’s times I’ve seen actors in military movies, and I wish someone had shown them how to salute properly, but I don’t get when an actor spends 6 weeks at basic so they can really get into the role. 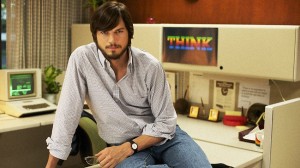 What made me think about it was an article today about Ashton Kutcher getting hospitalized because he’s playing Steve Jobs in a movie, and he got sick after following his fruitarian diet. Really, a diet? I get if you have to lose weight to look the part, but following the same diet? I just don’t get it. How does eating the same food as the person you’re playing make you a better actor?

Melissa George went to spy school for her role on Hunted. Maybe that teaches you some sharper skills or something. I wish when actors are playing baristas that someone would teach them to foam milk. But that takes about 10 minutes. Maybe like Argo, method acting is a good way to get spies to infiltrate places and say they’re “doing research for a part.” It’s crazy the access people will give you if you’re famous or have a camera.

How far are people willing to go as method actors? Since those playing soldiers go to boot camp, and people will eat the same food as their real life person, if they’re playing a murderer, are they going to kill people so they can really feel what it’s like to take a life?

Maybe method actors get it. Maybe it does make them better actors. But just know, Brad Pitt, when you don’t shower for days so you can really be the part, nobody else appreciates it. The smell doesn’t come across on TV. It’s television, not smellavision.

I guess the problem is so many people once they become famous don’t have real life experiences anymore. They’re stuck in their little Hollywood bubble and can’t go experience real life without paparazzi ruining it. Maybe they forget how to just act like real people. Which is a shame. If you can’t just read the lines and know how a normal person would react, maybe it’s time to take a break.

I’m not an actor anymore. I’m lucky that while these people have to do research on how to sit in an office and chase bad guys, I get to do it for real…. I guess it’s the opposite of the “I’m not a doctor, but I play one on TV.”