When reporters can’t use a map

I know I shouldn’t let it bother me so much, but since news.com.au just loves to make a huge point of everytime an American report screws up geography about Australia, I feel it’s probably time someone pointed out when they drop the geographic ball.

Now, I know that some people in Australia think that in the US there’s LA on one side, NY on the other side, and not a whole lot in between, except for Texas. But that doesn’t mean that everything that doesn’t happen in LA or NY is therefor in Texas.

This case first came to my attention a couple months ago, because Calhoun County in Texas is in my area of operations at work. I read the article out to everyone, because we couldn’t believe we hadn’t heard about it, but it was on an Australian news site. Then when this popped up again today, well, lets just say I’m not impressed. 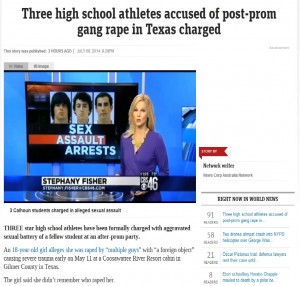 Now, I’m going to give the writers a bit of a break, and acknowledge that there is a Calhoun County in Texas. But this article states they are Calhoun High School students. So it’s the town, not the county. The article then states in happened in Gilmer County. Yes, there is also one of those in Texas. But the dead give away should have been the fact that they linked to an article; Gilmer Sheriff Stacey Nicholson told The Atlanta-Journal Constitution.

Atlanta is most definitely NOT in Texas. It’s in Georgia. Where, if anyone had even Googled this event, they’d immediately see that this is where this event occurred.  So please, before you make another article on your site about how bad the US reporters are at geography, make sure you also know how to use a map….

California on the left, New York way up on the right, the big yellow one in the middle is Texas, and then there’s 47 other states in there where things happen too.