Should all pedophiles be named and shamed?

When I first went public, as in to the media, and not just people around me, I talked about the abuse, and I even said who it was, but the media chose not to name the perpetrator. This caused much controversy, and a lot of heated debate. 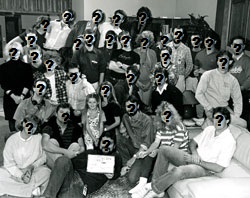 Many people believed I should name and shame or shut the fuck up. I was told that by not coming out with a name, I was damaging an entire show, that everyone who ever worked at seven was under suspicion. That I was irresponsible and damaging people’s lives and careers.

Corey Feldman is talking about his abuse. He wrote a book detailing his abuse, and what it was like growing up in Hollywood. He too is copping flack about not naming names. He originally put the names in his book, but the publisher decided to remove them, and his lawyers have advised he NOT publicly name them.

There are two reasons you don’t just run around naming alleged pedophiles.

Number one is the litigious aspect. If you can’t prove it, if you can’t afford better lawyers than them, if you don’t have people backing you up, you’re going to be sued and possibly charged with defamation. Not naming initially gives you a chance to have other people come forward, to corroborate your statement. When I went public, look at how many people came forward, not only as witnesses for me, but other victims. I knew there were others, but I didn’t know who they were. (I still don’t know who they are.) I wouldn’t have known where to direct police. I couldn’t have remembered every potential victim or witness. But by going public, I allowed others to say, Me Too! There’s also the very real threat of retaliation. If you go super public, and then you wind up dead in  a ditch somewhere, people are going to know you probably didn’t have an accident…

There’s lots of former child stars who suddenly end up dead outside a nightclub from an overdose when they start mumbling about abuse. I named my perpetrator  when it was legally safe to do so. Unfortunately for Corey, and other actors in the US, there’s a statute of limitations. He actually did talk to police back before it ran out. Their police chose to ignore it. – Sounds familiar…

The second reason, and this was actually the one that mattered to me:

When you talk about what happened to you in the industry, in general, without naming names, people do raise their heads and look around. People do start to look at everyone with suspicion. Parents start to wonder who is working with their children. This is NOT a bad thing. People who push their kids into the industry should be looking at everyone who works with their kids, and keeping their guard up. Parents should assume that the industry is NOT a safe place for kids.

Before I went public, everyone was worried about potential offenders. Once he was named, everyone just went back to their business, thinking OK, we know who that one person is. We’ll keep our kids away from him, and they’ll be safe.

No, they won’t. There’s way more than one pedophile in the business. By naming ONE person, all these parents have let their guard down, and are exposing their kids to potential harm. By not naming the offenders, Corey is letting people know that there are some seriously high ranking people in Hollywood who are dangerous predators, who are after your kids. Parents need to keep being vigilant, and not focus on just one person.

Corey Feldman is currently doing the rounds on talk shows, promoting his new book, Coreyography. I think it’s incredibly brave writing a book about the dark side of Hollywood. People may think I am nuts, but I do believe there’s a dark side of the industry, and that people probably do want Corey dead for telling tales out of school. I am nowhere near as famous as Corey, and I’ve certainly had my share of threats made after going public. I can only imagine the kind of threats he’s dealing with. Especially given the fact that so many of his peers have already met untimely ends. Think about all the kids in his former circle. River Phoenix and Corey Haim are two who are now gone too soon.

Now, I’m no fan of Barbara Walters. She has always come off as a hard, condescending bitch. Personally, I think she’s overrated. She really seems to have e thing for child stars too. She slandered Lindsay Lohan when LiLo decided not to do her show. She tried to keep it professional, but she was “disappointed” Lindsay decided not to do her show, and made a big deal about it to anyone who would listen. Look Babs, just cause you want to interview someone, doesn’t mean they’re obligated to it. If I was Lindsay, I certainly wouldn’t have done it. Barbara can be mean and brutal. Certainly not something someone needs fresh out of rehab.

But then I caught this snippet of Barbara’s interview with Corey.

While Corey is discussing how seedy the industry is, and how some of the most powerful people in it are pedophiles, and people need to be very careful letting their kids be a part of it, Barbara, who can been heard sighing and gasping throughout with disbelief, then lets out “You’re damaging an entire industry”

No Barbara, Corey isn’t damaging an entire industry. Pedophiles who rape young actors are damaging the industry. Corey isn’t to blame here. He’s trying to help people. He’s trying to bring awareness to a problem. I was told by countless keyboard warriors that I was irresponsible for going public. Before he was named, I was told I was affecting the reputations of everyone who ever worked on Hey Dad. I was callous and uncaring. I was destroying lives. I expected this from nameless idiots with access to a keyboard. I expect it from grown men who are standing up for their pedophile friends. I don’t expect it from someone like Barbara Walters. She’s been around long enough to know what goes on, and if she’s really that naive to think it’s not, then she’s a worthless journalist who has never really looked into a story.