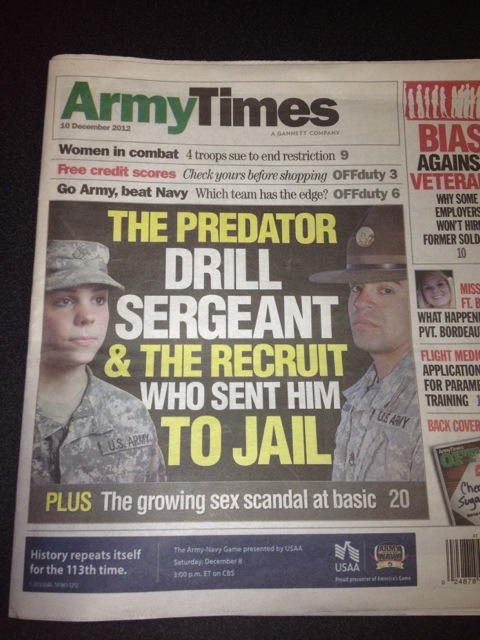 One lowly Private against the Drill Sergeant

The Staff Sergeant came back to the office yesterday with the Army Times magazine, and the cover story is about a Private who was sexually harassed by her Drill Instructor.

I tried to find the story on the Army Times website, and I couldn’t, but they did have a link to the video interview on the now PFC. She’s very calm, eloquent, and discusses what she went through trying to get someone to listen to her.

PFC Woodruff says he kisses and groped her, and she told her battle buddies about it. When she tried to report Staff Sgt Corral, she was told she didn’t want to “open that can of worms”. Eventually, word got round that she was speaking up. While she heard rumours of other girls involved, higher ups on base were calling her a piece of shit and a liar.

Apparently he was a very likeable person, and people were surprised by the charges. Instead, when PFC Woodruff finished basic and went to AIT, they sent an email to her supervisors there that she was a troublemaker. She was ordered to counseling, but they wouldn’t help her because she wasn’t a victim, she was just an accuser.

After all that, when Staff Sgt Corral was eventually arrested and is sentenced to 5 years in confinement, busted down to Private, forfeited all pay and allowances and will get a bad-conduct discharge and will have to register as a sex offender when he gets out of the brig.

I am so proud of PFC Woodruff. Just because he didn’t rape her, doesn’t mean what he did wasn’t wrong. She knew what he did was unacceptable. She had the guts to stand up and say something. Even when people were putting her down, she stayed strong. Because of her, others came forward. Others that he had done awful, terrible things to. She made it possible for the girls he raped and sodomized to come forward.

For all the girls out there, if someone does something to you, don’t ever let anyone tell you what that person did to you wasn’t really bad enough for you to complain about. That other people out there had shit done to them that was much worse, and you’re just being whiney. Maybe that same person is the one doing worse things… Speak up. Speak loud. Don’t let people shut you down.

PFC Woodruff got a happy ending. She ended up staying in the army, found a great husband who knows what happened and is now much happier. The Army is also looking into the way things were handled and is changing things up because of her too.