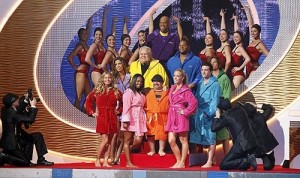 Dive in to Splash

So anyone who reads my blog knows I’m a bit of a reality TV tragic. I figure the format isn’t going to go away, so you may as well embrace it. Besides, some of it is interesting. A lot of scripted TV shows just don’t hold my attention anymore, or they become so predictable it’s boring.

So tonight, when presented with the choice of my old favourite NCIS, or reality selections including a Kardashian special, Hell’s Kitchen, The Voice or Splash, I started out on the Kardashians, well, mainly because I had been watching E! news and it just came on. That’s when I looked at the TV guide. 😉 Now since I’m not in the mood to actually pay attention to the TV, which NCIS requires, coupled with the fact that I can watch it again in repeats, preferably in a marathon on a lazy rainy day with my husband, I decided to give Splash another go.

Now, I know you’re all thinking I’m crazy. Yes, it’s a show about a bunch of kinda celebs diving into a pool. But I think Channel 7 may have been onto something when they picked this show up. I mean honestly, when the concept of Dancing With The Stars was first announced, how many of us were like, WTF? Really, a show about dancing celebs? Ballroom, Tango? Why do we care? But look how successful that show is. Well, Splash is kinda like DWTS, and here in the US, Splash is on at 7pm, and DWTS follows on the same channel at 8pm.

Now just like Dancing, you’ve got some TV types who are learning a new skill. One that’s way out of their element. What I didn’t expect was what a train wreck this show was going to be. You don’t really think of diving as a dangerous sport. However, there’s already been several people on the US version who’ve had serious injuries. Chuy, the little nugget from Chelsea Lately broke his foot in training. Last episode one of the guys overturned and smacked the back of his head and was really disorientated.. Tonight, someone flopped on their face and got a black eye. Seriously, a black eye. There’s lots of bellyflops and ouch moments. Let’s face it, we all like watching people hurt themselves. That’s why we love Jackass or those sports clips with all the car wrecks.

It’s also nice to see people who we think have everything show a human side. Kendra was terrified on the high board. She did the show to overcome her fear of heights, but it was too much for her. Some people made fun of her for not jumping, but I think a lot of people would back away on the 10m board. Just because you’re on TV doesn’t make you super human.

Just like DWTS, it’s about the competition, but it follows the same format of showing the rehearsals, and a peek into the personalities of the contestants.

If it’s got nothing else going for it, it’s on at dinner time and you don’t actually have to pay attention to it. You can have it on, and look up occasionally and know what’s going on. Let’s face it, sometimes we don’t want to have to actually watch, we just want some background noise on. After a long day at work, I don’t want to have to actually think when I get home and watch TV….

So make fun all you like of Seven’s upcoming Celebrity Splash, but I bet it rates well for the first couple weeks at least. If nothing else, people will watch the first episode to see how good, or bad, people look in their swimwear.