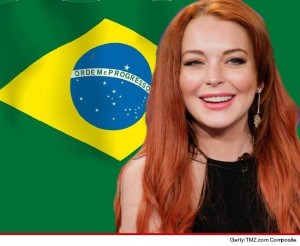 This is going to sound like a stab at Lindsay, and it’s not meant to be, because I really still hope the girl can turn her life around. However, I just don’t see how that’s going to happen when people keep rewarding her for bad behaviour.

Fresh off her court appearance, and being sentenced to 90 days of “locked-in” rehab, there’s news she’s flying out to Brazil to earn 6 figures for a few appearances. There’s also speculation she’s going to Australia for a similar sum of cash. Now – power to the girl that she can still make money, and hopefully she’s actually using some of it to pay her bills. We keep hearing there’s a lot of them.

However, at the same time, I think we’re just teaching Lindsay that the more she fucks up, the more money she can make. They’re keeping her in the headlines, and keeping her front page news. She’s never going to start looking after herself if she can still make money, jail time and all.

Even worse though, is that if a celebrity tries to do good, they’re banished. Corey Feldman tried to speak out about the abuse he and Haim suffered, and he was immediately tossed into the oblivion bin. Turn to God and you’re put in the crazy basket. Decide to actually stop drinking, and you’re declared boring and you’ll die a slow “whatever happened to that person” death….

It’s OK to donate money to charity, or do a couple of events, as long as it’s all red carpet glamour. But if you actually decide to get serious and devote a good chunk of your life to a cause, prepare yourself to be thrown out of the working circle. There’s no faster kiss of death than being considered an activist.

I wish we would reward people for thinking about something other than themselves. Those who donate time and money, or who put their personal reputations on the line for a cause shouldn’t become Persona Non Grata. Instead, those who continually flout laws, hurt others, or who act as if no matter what they do, they’ll still have money to pay their bills, (but don’t) should stop being rewarded.

I’m worried about what we’re teaching the next generation.

Make yourself famous at any cost. Stay famous, no matter what it takes. Don’t worry about breaking laws – you’ll never actually do time, and you’ll still be raking in the big bucks.

Take a personal stand, try to do right by some other people, and be told you’ll never work in the industry again….