Aussie version of I’m a Celebrity

So it was announced a couple months ago that Channel Ten and ITV have gotten together, and are making an Aussie version of I’m a Celebrity, Get Me Out of Here.

I’m sure they made the announcement so that all the potential talent would know it was coming up, and that this would happen:

Quite a brilliant move actually. Instead of hunting down potentials, only to be turned down, why not just have everyone who thinks they want to eat worms and be covered in spiders come to you? I can understand why everyone is lining up too. The UK version is a massive hit, and really does wonders with people’s careers over there. A “celebrity” gets to push their own personal boundaries, they get to help out a charity of their choosing, and they might make some new friends. (Or if you’re Peter Andre, an ex wife) With not  a lot of work in Australia, it’s seems especially appealing to even the B listers. Of course you’re not going to get A listers on there. They’re already working. Plus, honestly, they’d be boring. It’s always much more fun to watch someone who doesn’t have “a brand to protect”, or who thinks they’re way too special for this, and gets taken down a peg or two.  I do hope though, they don’t follow the US route and purposely pick a cast that they know will be a train wreck, like they did by putting Heidi and Spencer Pratt on there. It’s much more interesting watching the polite British who are so cordial to each other slowly unfold, than go straight in with the punches. I think there’s enough drama watching grown men cry while getting spiders on their face without having Heidi cry because someone took her dry shampoo…. I’m sure there will be a token foreigner on there. It seems like there’s always a foreigner on every Aussie celebreality show. – Please don’t put Speidi on there. Please.

I think it will be interesting having it in Africa. As long as nobody gets Ebola. I know there are people who think it should be filmed in Australia, since they already have a set there, but the whole point is to take people out of their comfort zone. Sticking a bunch of Aussie’s in the “outback” of NSW probably isn’t going to phase anyone. At least in Africa you’ve got some new wildlife. Plus, who wouldn’t want a free trip to South Africa? 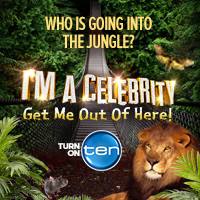 So, good luck to everyone trying to get on there. Better watch some of the foreign versions of YouTube so you know what you’re getting in to! Ya’ll know I’m a sucker for celebreality, so I’ll be watching.

If you’re a sucker for celebreality like I am, you can keep up with the new Aussie version of I’m a Celeb on Twitter, or go to their FB page.