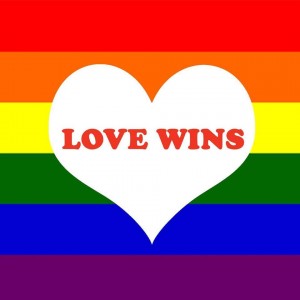 Congratulations America. I had woken up this morning to news of three separate terrorists attacks, and as I looked at the yellow countries affected on the map, which were all fairly close to Italy, where I’m about to head on vacation, I was starting to feel nervous. The online news showed me uncertainty in Greece, also on our travel list.

As I was watching the news, fearing more doom and gloom, as they talked about Obama heading to speak at the church in South Carolina that was attacked, the TV popped up with BREAKING NEWS, and finally, something good in the world.

The Supreme Court of the United States had finally reached a decision on Same Sex marriage. A country that claims to separate church and state, but usually doesn’t, finally had an epiphany, and listened to the majority of its constituents. They finally made Same Sex marriage legal in all 50 states. Congratulations America. I am very proud of you. You have joined other forward thinking countries in recognizing the rights of all people to love and marry.

Ok Australia, it’s your turn. Do me proud.