I’m going to come out and say it, I was in support of the New Arizona laws. 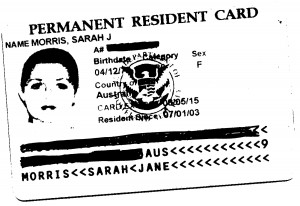 As someone who went through the effort of coming to the US legally, first on a tourist visa, then going through the process of getting a work permit, then a green card, and last week sending off my application for US Citizenship, I know what it means to be an immigrant. Sure, it wasn’t cheap. But getting my visas legally was way cheaper than what most people pay a coyote to bring them through the desert illegally. I think if you can afford to save up $5000 to pay a coyote, you could save up the $1000 for the residency application. Shit, if you can save up $5000 in Mexico, you’d be rich and wouldn’t need to come to America! I’ve seen reports of people spending up to $75k on a coyote. If I had $75k, I’d move to Mexico and retire.

I have several friends who came to the US from Mexico. I know people that are here legally and some that are here illegally. Amazingly enough, most of the ones who came here legally said it really wasn’t a big deal. They went to the US embassy, applied for papers and got them. Sure, there’s a wait, just like any other country. It’s not like I got my papers overnight just because I’m Australian. Someone once told me, if you really want something, you should do it properly. It’s worth waiting for. Most of the people I spoke to believe the same thing. Those Mexicans that went to the effort of applying to come here legally don’t like the ones who came here illegally. The illegals give the legals a bad name. People think just cause you’re a Mexican in Texas you must be a “wetback”. I feel bad for those that went through all that paperwork just to get labeled that way, because so many of their fellow countrymen choose not to do the right thing.

People think the new Arizona law was about racial profiling. It wasn’t. They weren’t going to be pulling over random vehicles because people in them were brown. It was about when someone was pulled over for speeding, and that person couldn’t present an Arizona drivers license, they would then ask them where they were from, and if they were here legally. I really don’t see what’s so bad about that. If you’re breaking laws, people have the right to ask you for ID. If you’re here illegally, and breaking more laws on top of that, they should be able to deport you.

There’s more than just whites and browns in Arizona. If I got pulled over for speeding, I’d expect that they asked me for my papers. Of course, since when I got my greencard it clearly stated that I had to have it on me at ALL times, I always carry it on me. I know plenty of other Aussie’s who don’t carry theirs.  Call me paranoid, but since I live less than 2 blocks from the immigration building, I like to keep it on me at all times. I also like to take my passport if we’re going anywhere near the Mexico border. There are checkpoints at the 100mile marks, and whether you left the US or not, they’re going to pull you over, ask for your ID, do random vehicle checks and I’d rather have my papers and be prepared. It’s not racial profiling when they ask my husband and I to pull over and show our papers. They do it to everyone. Instead of taking it personally, I’m grateful that there are people there making sure that there’s isn’t a mass influx of people and drug trafficking going on.

People also don’t get that it’s not just about Mexicans coming here illegally. Plenty of radical Islamic terrorists are using the Mexico border as a way to come into the US. People who complain that Arizona was only targeting “brown people” meaning Mexicans forget that Middle Easterners are normally pretty brown too. Someone from Iraq could easily blend in with the thousands of Mexicans making the trek across the border illegally. While the cartels are bringing in drugs, the terrorists could be bringing in bombs or biological agents. If they’re driving down the street and get pulled over for turning without indicating, I’d love for the cops to ask them for their ID. You’ve got to have a drivers license to drive a car. If you’re an American and you drive without one, you get into trouble. Why shouldn’t someone who is here illegally?

Right now, the way the laws are set up, it seems like you’re better off being here illegally. You can work, but don’t have to pay taxes. You can drive, but don’t need a license or insurance. If you get sick, you can go to the ER and never have to pay the bill. If you do get pulled over for something, or commit a crime, you can say it was racial profiling and a bunch of agencies will come to your rescue. It’s total bullshit. What incentive is there to be here legally? If you want to live here, you should have to follow the laws here. Simple as that.