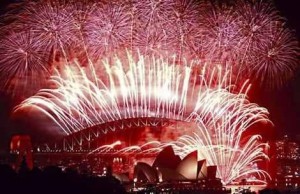 Matt & I are out at the ranch, trying to get some work done on the camp out here. I turned on my live stream from 2DayFM and realized its already New Years Eve in Australia.

Without a doubt, Sydney has the best New Year’s Eve party in the world. The problem with growing up in Sydney, is that any other NYE party seems lame in comparison… When I explain to people here the massive scale of the fireworks, all over the Harbour, with a live simulcast on the radio, with everything choreographed, people are amazed, and jealous. I just don’t get the oohing and aahing over the ball drop in New York. The 15 minute display of fireworks in other cities, that just seem like someone sets off random boxes doesn’t compare.

Tomorrow it’ll be NYE here in America. I’ve got watch at work, so I’ll be busy till about 10pm. Matt will be joining me in my little town. We’re not really sure anything will be going on at all, but at least we’ll be together. That’s all that really matters.

I hope 2013 is a big year for all of you. A lot of people got hyped up over the end of the world with the Mayan calendar. It was never supposed to be the end, just a new beginning. I see several things changing in 2013. A few things got started in 2012 that will really evolve in 2013.

The Royal Commission should get into full swing in 2013. The Jimmy Saville case in England is only going to get bigger. I have a feeling that I’ll be in Australia taking care of business in 2013. 😉

Come January first, I’ll have been at my job for a year. I actually really enjoy it. Next weekend I go off for some training, and then I’ll get put in for a promotion. No pay change, just a shiny new rank.

I hope all of you have an awesome New Year, wherever you are. I hope 2013 brings you joy and happiness and all that you want to achieve.

We  just have to hope on January 1st in America we don’t all get pushed over the “Fiscal Cliff”….

Sorry about any typos. I’m doing this from my iPhone at the ranch…