Why does it matter if gays get married? 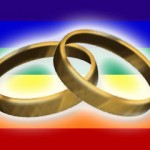 I’m sure I’m going to upset a lot of people with this post. Gay marriage rights are such a divisive issue. But, it’s something I feel pretty strongly about, so I’m going to just put it out there…. Why start holding back now, eh?

I’m pretty amazed that in the year 2012, we are even having a discussion about gay marriage rights. I wonder if this is how people felt back in the 1950’s in the American south while they were trying to create equal rights for black people. Today it seems crazy that colored people had a separate bathroom, or had to ride at the back of the bus.

In South Africa, where Nelson Mandela is now a revered figure, it’s crazy that there used to be apartheid. Way back before my time, women weren’t allowed to vote. People couldn’t migrate to Australia if they weren’t white. People used to be burned at the stake for being a witch. My point is, there’s a lot of things in the past that people were pretty passionate about that just seem ridiculous now.

In 20 years, kids will be incredulous that gays had to fight for the right to be married. I mean, what is marriage anyway? I’d like to be all romantic and think it’s the binding together of two hearts, but really, marriage is nothing more than a legal business contract. It always has been. It’s the tying together of two people financially. Back in the day, and still today in many third world or middle eastern nations, it is a way for a man to essentially purchase a woman. The man was now responsible for his bride. He had to provide for her. Even in England a hundred years ago, women did nothing more than look for a good husband who could provide her status and money. (Pride and Prejudice anyone?) Shit, women still do that today. That’s why marriages now have pre-nups. If marriage was only about love, people wouldn’t have to sign financial contracts before they said I Do. There wouldn’t be dowries. There wouldn’t be arranged marriages.

Marriage also provides other financial benefits, like health insurance, life insurance and being  recognized in a will, should one party die. It also means if one party goes to hospital, the other one is recognized as the next of kin and gets to make life altering decisions for the other one. I couldn’t imagine if I was taken to hospital and I was told that Matt couldn’t make decisions for me, that they were going to defer those to my mother. I haven’t spoken to her in over 2 years. What would she know about my wishes? When Matt was in hospital and on life support, there was a misunderstanding over whether he could have a transfusion or not. Matt and I had often talked about worst case scenarios, and I knew what he wanted. His parents had different ideas. The hospital stepped in and said as his wife I had the legal and ultimate decision over what happened to him. When he woke up, he was grateful I had been there to make the call, and stand up for what he wanted. I’m sure there’s many other people in the same position.

I love Matt more than life itself, and couldn’t imagine being without him. However, getting a Greencard so we could stay together was a pretty big push for us to get married. If we didn’t, I’d have had to keep flying back and forth. I can’t imagine being a gay or lesbian who is told that because I can’t get married, I can’t be in the same country as the one I love.

I don’t believe in the Church’s view of one man and one woman. For starters, I don’t believe in the church. I think it’s nothing more than a corrupt institution that was used back in the day to control the masses with it’s oligarchy. These days most churches are still corrupt and self serving. Look at the Catholic church. It’s all about real estate and covering up child abuse.  Evangelicals and TV churches will pray for you for money. Sects of the Mormons think it’s ok to have 5 wives, but no gay marriages? Others will kill each other because they don’t believe in the same God. Religions are always picking and choosing which bits are relevant and which bits they’re not going to listen to anymore, so it’s all pretty pointless and self serving anyway.

If you need an invisible friend to talk to and that’s your thing, then power to you. I however belong to the Church of Me. I believe in myself and that’s all I need. I don’t need someone preaching to me about something that may or may not have actually occurred over 2000 years ago. I don’t need to tithe to some institution who uses it to pay off lawyers, or buy the preacher a nice house and car, while they never give anything back to their community.  I don’t need to kill people in the name of my God, or think less of someone because they believe in a different God. I know right from wrong, and don’t need the promise of heaven or hell to make me stay on course with my moral compass.

Gay marriages aren’t going to erode the sanctity of marriage. People like Kim Kardashian and Ana Nicole Smith have both done that. Elizabeth Taylor couldn’t keep it with one man. JFK wasn’t loyal to Jackie O. Jackie O married Onassis for love? Yeah, right. Plenty of hetero couples make a joke of the “sanctity of marriage”. It’s up to the couple to make a marriage, it’s not up to others to judge it and approve of it.

Most of my favourite people in this world are gay. My dad was a fashion designer, and we were exposed pretty early as kids to gays and lesbians. I grew up loving “Uncle Pierro”, who was with Harold until Harold died. I was so excited when Pierro was at my brothers wedding. At channel 7, a huge number of the crew was gay. It was almost a requirement to work in the props dept. I don’t know what I would have done without Gordon. He was always there with a packet of Tim Tams and a hug. He was also the one who finally stood up to the director when she thought it was OK to hit me with a cane on set. He was the one who told her if she hit me again he was going to report her to child protective services. The cane disappeared. My best friend growing up, Kate, had a mum who was a lesbian. She lived with her partner.  My favourite in-laws are Uncle Pete and Aunt Steve. I don’t know how I would have made it through some of the family get togethers without those two. My publicist Stephen lives with his gorgeous partner, Ben. Those two have done so much for me. (Although on bad days I curse Stephen for making me go public) These are all people I love, and I don’t see anything wrong or different about them. They just happen to love someone who has an inny or an outtie that matches their own. That doesn’t mean they don’t deserve to be in an equal relationship with the one they love. If Steve gets sick, Pete should be allowed to make decisions for him. If a partner dies, the one left behind should be treated as a spouse, and not have to jump through hoops with what’s left behind.

I think gays and lesbians should be allowed to have kids on their own or adopt them. Kate lived with her dad, but her mum and her partner were always there for her. What’s the difference between a couple having a kid, then one of them realizing they’re gay, and a gay couple already together having a kid? Either way the kid ends up with a blended family. I had a mother and father. Then my father died. Lots of women are single mothers. Their kids don’t have a father and mother. Saying kids need one of each is such bull-shit rhetoric. Are we going to round up all the pregnant women whose husbands died on the battlefield and tell them they can’t keep those kids because they don’t have a dad? What about women who don’t know who their baby daddy is? It’s not like a couple is an island. Kids are exposed to people of both sexes. Other adults step up. Kids seek out what they need. As long as both parents love that child, raise it properly, teach it manners and respect, who cares if they have two mummies or two daddies? So many kids these days already have 2 mums and 2 dads, or 3 or more, because their hetero parents keep getting divorced and re-married.  Matt and I have chosen not to have kids. Ever. Does that mean we shouldn’t be allowed to be married? According to some religious folk, the only reason to get married is to have kids. Should infertile couples have their marriages annulled?

I don’t think it’s right, or constitutional, that town Mayors told Chick-Fil-A that they can’t open new restaurants in their cities,  but you can bet your arse I won’t be eating at a Chick-Fil-A ever again. I don’t tell them they should be open on Sunday instead of going to church. Companies should make products, not spout religious views. I’m an Athiest, but I don’t try to deny people rights based on my non-belief of a deity. I don’t begrudge religious people their right to their beliefs either. I just think people should keep their religious beliefs out of politics and legal issues. Go ahead and pray before dinner, or at the rodeo, or the football game. I won’t begrudge you that right to pray in public. Just don’t expect me to say the words with you, or believe any of it.  But religious people shouldn’t begrudge others their rights either. I will take those people that I love, and who have always been there for me, and who treat me with love and respect over some imaginary person and whatever crap people spouted thousands of years ago any day. I hope that Australia and America both move past the Church v’s State issue, and realize that the love/financial contract between two people shouldn’t be a religious issue.

If Matt’s uncles, Kate’s mum, or Anderson Cooper want to get married to their partners, then they should be allowed. Maybe one day people will look back and think not allowing Pete and Steve to get married is as silly as not allowing a mixed race couple to marry. What a grown couple does in their own personal life has absolutely no effect on me whatsoever. If another couple gets married, gay or straight, it’s none of my business what they do in their bedroom. It doesn’t infringe on my right to Life, Liberty and the Pursuit of Happiness.

People are people. We shouldn’t be defined by the colour of our skin, by our choice of invisible friend or by who we fall in love with.