Or better put, Friends who are Formers

I had a little rant yesterday about faux friends, but it’s not all bad. I have been lucky enough over the last few years to make some really good friends.

It’s kinda weird being an expat. You have a completely different background to other people. There may be some common ground as an adult, and you may learn about the locals culture, but you never lived it, so it will always be different.

It’s kinda the same thing with being a child actor. You had a completely different experience growing up to everyone else. Lots of former kid stars leave the industry and end up with regular jobs, but they don’t share that bond with other people of regular childhood experiences.

I get a double whammy of not growing up in the US, and even in Oz, I didn’t have the normal childhood experience. I have been lucky however to find other Expats to share time with, and even more exciting, other former child stars.

There’s not a lot of child actors in Australia. Maybe the kids from Secret Valley, Henderson Kids, Home & Away, but most are older, not young kids. Kate Ritchie, Rebecca Smart and Jamie Croft were about the only kids my age actively working when I was a kid. The kids in the US are lucky that with so many TV stations, they had a bunch of kids to share experiences with.

The kids in the US are even luckier, because they have set up groups to help try and protect them, to support them, and to just let them know there’s people there for them. I first found A Minor Consideration a few years ago. It’s founded by Paul Peterson, who was a teen idol, and probably best known for his work on The Donna Reed Show. I had written him an email letting him know I thought what he was doing was awesome, and I wished we had that kind of group in Australia. Fast forward a couple of years, and I now have a bunch of the most incredible people I can call friends. Others who share the odd experience of growing up on TV. Some also share the experience of being abused while working on TV.

In the middle of the trial, when I thought my world was going to fall apart, I got this: 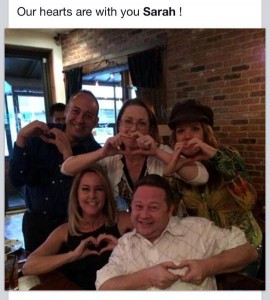 These guys are amazing. When I first met them, they had no idea who I was. Nobody in the US has seen Hey Dad..! I never imagined they wold take me in as one of their own. Yet, they did. They sent me messages of support throughout the months leading up to the trial. I went to LA and met a bunch of them in person at a get together, where I was made to feel like part of  a community. It didn’t matter I was a foreigner. We all shared some strange bond of growing up in the limelight, and I had many of them thanking me for going public, and trying to take a stand for all the kids who had been abused in the industry. Unfortunately the US has a statute of limitations, and by the time some found their courage to talk, the time had passed. Others thankfully had wonderful experiences growing up in the industry, and it was good to hear those stories too.

I’m pretty damn excited that later this month I’m headed to LA for the weekend and I get to hang out with these guys again. I feel very lucky to have met such a wonderful group of people.

Paul Peterson is retiring soon, and some of us are going to try to fill his big shoes. I’ve suggested that after my incredible experience, we have an international division, which was greeted with a big yes. So if you’re another former kid star, or a current child actor or entertainer who needs someone to talk to, even if it’s via email, let us know. A Minor Consideration and it’s members have been the most amazing group, and some days, I honestly don’t know if I could have made it through this without them. These guys are not just other former child stars, they’re my heroes.

A Minor Consideration isn’t just a social group. Paul and the others work tirelessly to help change laws to protect child entertainers. People think child stars have it all, but as my case has proved, sometimes they really need people to step up and help out.