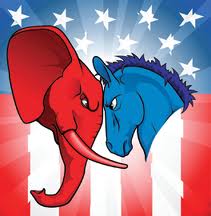 The 2012 Election campaign is in full swing in the US. While there are in fact FOURTEEN people currently running for President of the United States, the media would have you believe there was only TWO people running – Obama and Romney.

I run in all kinds of circles, but most of my friends are big Ron Paul supporters. He ran in the last election as a Libertarian. Everyone loved him, but they all considered a Libertarian vote a wasted vote, so they voted Republican. This time, Ron Paul is running as a Republican, but the media has done their best to ignore his existence. They still want the American public to believe there’s only two options, Obama and Romney. Of course, by focusing on those two exclusively, they’re assuring they’re the only two people who get any votes on election day. It’s a self fulfilling prophecy.

What’s even more troubling to me than the media bias and their clear intent on creating the next President, is the actual candidates themselves.

I consider being a politician to be a job, or for some people, a profession. Now, most people when they apply for a job, write up a resume, a nice cover letter, they may do a few rounds of interviews. The better the job, the more interviews you’ll probably have to do. Some jobs you’ll have to do background checks, maybe a credit check. They’ll talk to your past employers, ask for references, you know the drill. Throughout this whole process, the candidate is talking about themselves. They talk about why THEY should be hired. They’ll tell potential employers why they are right for the job, what skill they have, why they are the best candidate. At no time do they talk about other potential employees.

Why can’t political elections work the same way? The Presidential position is a job. Their employer is the people of the United States. They’re asking us to give them the job. So just once I’d like to hear a Presidential Candidate talk about why I should vote for them, and not why I shouldn’t vote for the other guy. It seems like candidates have no good points of their own. They never tell me good things about themselves. All they do is tell me bad points about the other people, and the reason I should vote for them is because they’re less of a douchebag than the other guy.

This appears to be pretty universal. Politicians everywhere seem to have descended into this schoolyard mudslinging match of making everyone else look like idiots and liars, while not really saying anything special about themselves, except, I’m better, cause he sucks.

The US President also has the additional responsibility of being the Commander in Chief of the US Military. I personally think if you’re going to be the highest ranking guy in charge of a military, you should have some kind of military experience. At the very least, you should at least respect the men and women who are willing to sacrifice their lives when you decide you’re not adult enough to work shit out diplomatically and decide to declare war.

Now that I’m a US Citizen and I’m allowed to vote, and I have already done so in the Primaries, you can bet I won’t be voting for Obama or Romney. I’m not going to give my vote to someone just because they’re not as bad as the other guy. I’ll be giving my vote to someone who actually talk about themselves, and how they can make America a better place for Americans.

I invite all Americans to actually do some research on the 14 candidates. Don’t base your vote on what CNN or FoxNews tells you. Find out for yourself what the politicians are running for. What their intentions are. Who they care about. Make an informed decision. If you like someone, go out and vote for them. You don’t have to stick to the two who are paying the news to show their faces. If everyone voted for who they liked, instead of thinking of it as a “wasted vote” we might surprise some people and shake up the establishment.