Why is there such a double standard for Celebrities?

I’m so glad I’m not a celebrity anymore. Sure, there may be some perks to being famous. You get to cut the line at clubs, people buy your drinks. You might get to go on cool vacations. But the reality is, most of those things aren’t that much fun, because you’ve always got to wonder who is watching you, or whose going to pick a fight with you in the club and sue you next.

I mean, you may be in First Class on the plane and think you can get some sleep, but who knows who is going to snap a pic of you while you’re drooling and then stick it up on the internet? 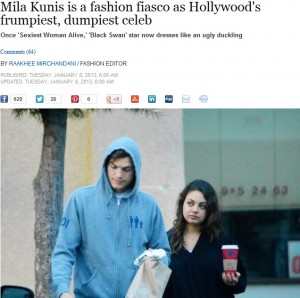 I mean seriously? Mila Kunis is smoking hot. She was just voted Esquire Magazine’s Sexiest Woman Alive. I personally think she’s on of the most beautiful women ever. Even in her trackpants and workout wear. But apparently the Editor of Teen Vogue is unimpressed with Kunis getting around being comfortable. She is tired of seeing her in gym gear. How does she think she stays that hot? She works out. If they only place the stalkerazzi manages to get pics of her is when she’s out on a run, then yes, you’re going to see pics of her in her sweats.

What made me really upset when I read it was that it was the editor of TEEN VOGUE who was pushing that Kunis should be dressing better. Do all celebrities have to go out in full make-up and 6″ heels like a Kardashian, even to get their morning coffee? I mean, what are they teaching teenagers? That they have to be glamorous ALL the time?  Maybe she’s dressing down because she hopes if she’s not all glammed up, then nobody will notice her. She’s hoping to just blend into the crowd. Or maybe she just didn’t feel like spending an hour doing her hair and make-up just so she could grab a latte. Of course, even if she did dress up, if she wore the same shirt, or pants, or shoes she wore last week, somebody would jump on her for that.

Then if we’re not berating a celebrity for their fashion choices, we’re picking on their weight. If you’ve eaten a burrito for lunch, some pap will take a pic and claim that you’re pregnant. If the celebrity sees it, feels like shit, works out and eats less so they don’t get pregnancy rumours, then the magazines will talk about them being skeletor and how they’ve gotten too skinny.

Remember Nicole Ritchie? She was a normal sized person when she did the first season of The Simple Life. Next to Paris Hilton, who had bones sticking out, she looked bigger. But I wouldn’t say she was fat. But a lot of people did. She lost the weight. Then lost more. Then magazines complained she had an eating disorder. Well Duh. If everyone in the world is calling you a fat ass, it’s probably going to give you some kind of complex.

Thankfully Nicole found a balance and these days she looks healthy.

I’m so glad that nobody here cares who I am. When the dog wakes me up in the morning and wants to go outside to pee, I don’t have time to fix my hair and makeup. I normally don’t even have time to brush my teeth. So when I roll outta my trailer, I’m all kinds of unkempt. If I feel like hanging in my PJ’s till I have to get dressed for work, I do. Nobody at my RV park cares.

I can’t imagine the pressure of having to be glam all the time. I’m so glad I can go out and eat lunch and not worry. I can go out and have a drink with my friends without ending up in the paper. I can go swimming at the beach and not end up on some Worst Bikini Body list.

Why do we have to be so mean to famous people? Are we jealous because we perceive they have a more fabulous life, so we have to nit pick over stupid stuff? Or are people just generally unhappy and so they have to make themselves feel better by picking on someone else?

I wish people would remember that Famous people have feelings too. They also see the gossip magazines. They watch Fashion Police. They get told when they’re on a worst dressed list, or when people point out their cellulite, or when they’re on a Stars Without Makeup feature.

Can you imagine if everytime you left the house, someone was just waiting to see what bad thing they could say about you? Megan Fox is right when she says that being famous is like being bullied by millions of people. Sure, it’s easy to say just to ignore it, but it’s kinda hard. When your face is on the TV and magazine covers, how are you supposed to leave the house and not see it? Or even stay at home and not see it? Famous people watch TV too….

We also need to think of the trickle down effect. If we keep finding flaws in beautiful famous people, then what hope do regular people have? I see someone who I think is absolutely gorgeous, and I’m told by some editor that they’re flawed because they have a single dimple of cellulite, and I look in a mirror, and I think shit, I better not leave the house. My arse is full of it. What about my hair? Is it the right shade? Is it the right length? Are my friggen eyelashes full enough?

I think we all need to just start accepting people for who they are. Maybe if we can accept our own bodies, we can accept a celebs body. Or maybe it’s the other way around. I’m not sure anymore.

One Reply to “Can’t celebrities be civilians too?”