Bravehearts’ breakthrough safety initiative Ditto in a Box will reach and educate all Australian kids about the dangers of sexual assault.
The Ditto in a Box education pack teaches personal safety skills and underpins children’s instinctive understandings and feelings around their personal safety in a way that is non-confronting, safe and highly effective. 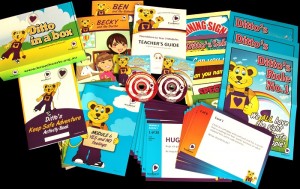 Stephens College at Coomera became the first school in Australia to implement the education pack into its program with the assistance of Rob Molhoek, Assistant Minister for Child Safety and Member for Southport; and Detective Superintendent Cameron Harsley, Child Safety Director at Queensland Police Service. Also present were Bert van Manen MP, Federal Member for Forde and The Member for Albert, Mark Boothman MP, students, teachers – and Ditto.
Developed to complement the Personal and Social Capability Criteria of the Australian National Curriculum Version 3.0, it is focused on providing children with protective factors to build resiliency and empower them when faced with unsafe situations.
The age appropriate personal safety program was created to meet soaring demand from schools and early learning centres around the country for the popular Ditto’s Keep Safe Adventure show, which will soon reach its 250,000th child.
Since its first Australian school show in Brisbane six years ago, the Ditto live show has expanded and now delivers shows across nine regional areas in four States (Queensland, New South Wales, Victoria and Tasmania).
Bravehearts faced a challenge of how to address the growing waiting list of schools and childcare centres eager to get access to the show. It sparked the idea for Ditto in a Box – an education pack that contains five teaching modules on safety as well as warning signs, scenario cards, music and storybooks.
Bravehearts Founder and Executive Director Hetty Johnston, said as part of the vision to make Australia the safest place in the world to raise a child, it was critical to provide a personal safety program which educates, empowers and protects our most vulnerable.
“There are thousands of kids Australia-wide in remote locations who cannot get access to Bravehearts’ live safety program featuring the lovable Ditto,” she said.
“It’s not fair that thousands of kids miss out because we don’t have the resources to reach them all. Hopefully that’s about to change and we expect a big take-up of Ditto in a Box, which will deliver our safety message to schools everywhere.
“This benefits kids that have seen the live show too as it aims to support and reinforce the messages they have learned there.”